Peace sells but who's buying? 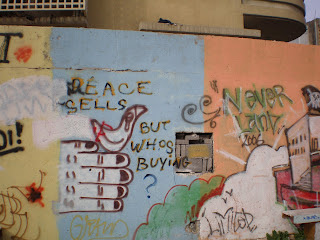 "Peace sells but who's buying?" is a slogan (painted onto a wall in Florentin) that I never managed to get my head around. It sounds catchy but doesn't make sense. If peace sells then there must be buyers - right? But what if there is more than set of buyers in the peace market. Then peace would be bought by some but not others. Also right.

That, I think, is exactly what is happening right now. There are buyers in the peace market. The US for instance which would like to offset its losses in Iraq and blunt Iranian/Shiite advances with a deal between Israel and the pragmatic wing of the PLO. The same goes for Europe and the rest of the international community. Then there's Olmert, prepared to make peaceful noises as long as this holds out a chance of staving off demands for his resignation over his malfunctioning in Lebanon and/or corruption allegations. And Abu Mazen, keen to show Hamas-controlled Gaza that violence (especially against Fatah) doesn't pay and that his tottering administration is capable of delivering the goods.

Now for the list of those who are not in the peace market. Let's start with the vast majority of Israelis and Palestinians who are not prepared to meet the red line demands of the other side. Just for example, most Israelis are not prepared to share sovereignty in Jerusalem or accept the return of even a symbolic number of refugees while most Palestinians do not recognise any Jewish rights on har ha-bayit (Temple Mount) or are prepared themselves to drop the demand for the 'right of return' that most Israelis consider to be a death knell. And those are the moderates. To their 'right' are political/social forces - the Hamas/Islamic Jihad on the Palestinian side, the Likud , the settlers and the rightist/religious parties on the Israeli side - that have sufficient power to block the implementation of any peace agreement that might, just, be signed between the two weak leaders of Israel and the West Bank.

So what's it all about? It's about playing for time, apparently. There are analysts who believe that the two 'pragmatists' Olmert and Abu Mazen know that they are unable to reach an agreement but will keep this little secret to themselves. We'll have a US sponsored 'peace gathering' in November and more meetings after that and time will go by and meanwhile, at least, the sides will be "talking peace"and some trust will at least be renewed. But this deceit can only continue for so long. One day the masks will be removed and then... Who knows, but it won't be good.
at August 19, 2007

Hi Worried Man,
I am following your Blog a couple of weeks now, and at is a pleasure to read your Blog and admire your Photos and Music.
We all know that Israel is small, and when I looked at your pictures, it turned out that you are my neighbour....
I will add soon a link to your Blog on my Blog http://www.guten-morgen-tel-aviv.blogspot.com/
You can also contact me per mail:torsten40(at)gmail.com
regards
Torsten