- March 10, 2009
For the third year in a row Florentin was the site of the biggest and bestest Purim street party in town. So big, that the crush on some street corners made breathing, let alone movement, impossible. These photos were taken at about 1 a.m. and people (all of them younger than we, many of them stranger looking) were still streaming into the area. 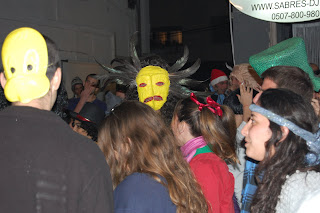 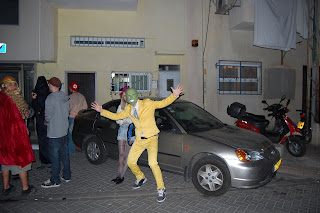 It goes without saying that in Tel Aviv, Purim is just an excuse to dress up in a costume, act silly and get drunk. Consequently it beats other festivals hands down. Click to enlarge pics. 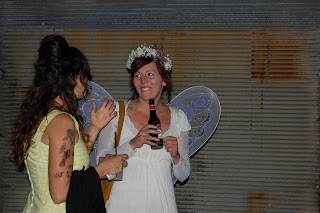 There were many tipsy angels in the crowd. 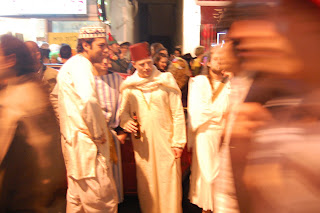 As well as delegations from the east. 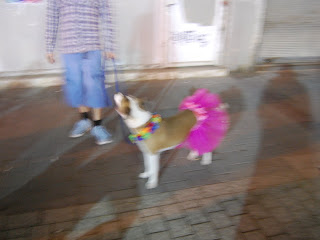 Everydoggie was getting into the act. 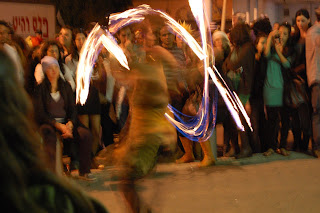 Some went to extravagant lengths to gain attention. 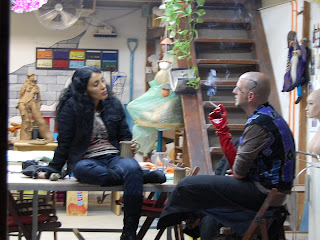 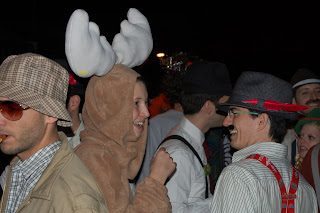 Moose meets leiderhausen in what could be the beginning of a beautiful relationship.

Popular posts from this blog

Ends and Beginnings - Confessions of a dad band member 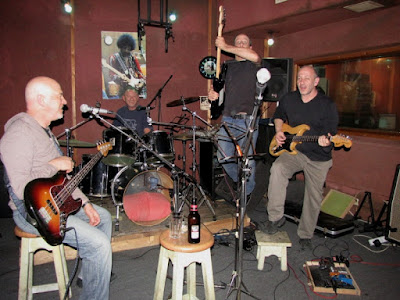 We coalesced in the early oughts, four, middle-aged men with full time day jobs and families, closet strummers and pickers looking for something more. For years, Danny B and I had been playing acoustic guitars and Zev and Danny Z had been sawing away on electric guitars.  But by the time the two musical duos got together and became a quartet, Danny B was also playing bass and I was taking my first steps as a rock drummer. Mmm …two guitarists, drums, bass– a classic lineup. Maybe, just maybe, it wasn’t too late to realize the definitive male boomer fantasy - and play in a rock band. We jammed, we clicked, we sensed we had a future and we decided to call ourselves Midlife Crisis.   Rehearsals began in the moldy air raid shelter of our apartment building, and graduated to a series of bare-bones rehearsal spaces in nearby Florentin. It was cool to hang with younger, unknown bands wrapping up their sessions before ours or coming in after us, to compare styles and sounds and to
Read more 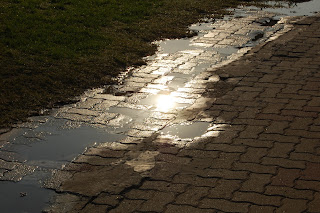 The writer and poet Haim Heffer  a bastion of secular Israeli culture from  the “ Palmach generation”, passed away yesterday and today they are playing his songs on the radio. When I first arrived in Israel and began to distinguish a few Hebrew words in the songs I was hearing on the radio, many of them were his. I also cut my teeth on the maqamas   that he wrote in Yedioth Aharonoth, in which he’d comment in rhyme on current affairs – a form that seems hopelessly outdated now but was taken seriously then. Even someone taking his first steps in the language could recognize that Heffer was a master wordsmith with a prolific output. But, for me, the sentiments expressed in many of his lyrics belonged too closely to the 1948 generation, to times and places before my time, that were foreign to me.   . Not so with one song that I loved from the start : Hakol Zahav  (Everything’s Gold). Heffer wrote the lyrics for the singing troupe Ha-Tarnegolim  (The Roosters) under the dir
Read more 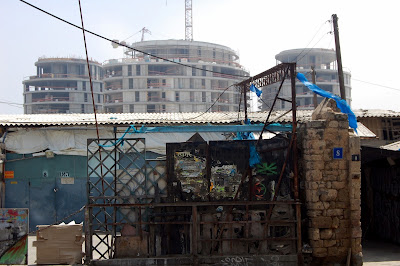 Florentin is in metamorphosis. Ramshackle constructions are rapidly giving way  to new building projects that are springing up everywhere. Here the stylish, Bauhaus inspired residential project designed by Ilan Pivco rises above Florentin's  makeshift sheds.  The street artists are still running wild for now but, as the building cranes approach, like endangered species may soon have to find richer hunting grounds. These industrial alleyways populated by metal shops, carpenters, students and artists won't be here for much longer. But two young architects bought an old store, in a street much like the one above, renovated it, designed it to collect as much light as possible and have transformed it into a flat and studio. Their  block is slated for demolition but meanwhile... Spotted in a design studio we visited on' Open Houses' weekend. Tel Aviv separates itself from the rest of the country: a scenario that many would say has a
Read more

Tel Aviv Rooftop
Retired scribbler, musician and photographer. Married with grown up kids. Still suffering from creative urges. Living in the Tel Aviv Bubble, the liberal/ cosmopolitan corner of a small, crowded, complex, manic and unique country. This blog will be a place to satisfy the writing bug and to record and reflect on whatever happens to strike me as interesting or important at the time.