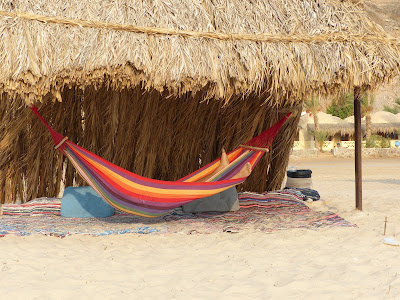 The transition into the Third World is immediate. Time slows down. The Egyptian customs officials greet the trickle of incoming visitors from Israel with a lazy indifference.  At the entrance to the marbled Taba terminal there is a sort of podium where visitors are supposed to fill in entry forms. The forms have been commandeered by three men who, in return for baksheesh, fill them in for you. At the bank, my dollars are turned into an unwieldy wad of Egyptian pounds. The ATM machine doesn’t work.

In a Bedouin taxi we speed unnervingly along the twists and turns of Israeli-laid southbound coastal road. No-one’s wearing seat belts; Khaled, the driver, is singing along to a hit song. To the left, the beaches and sparkling waters of the Red Sea/Gulf of Aqaba and the rosy outline of the Jordanian side of the gulf; to the right, imposing red granite mountains, changing hue in the late afternoon sun.

The once unspoiled desert coast is now scarred with the concrete carcasses of abandoned tourist resorts, a graveyard for the megalomanic developments made in the Mubarak era that failed or were halted in mid-construction. Between these we meet familiar sites like old friends: the Salah a-Din Citadel, the “fjord” and the long stretches of beach where the simple Bedouin husha tourist camps are named ‘Freedom’, ‘Utopia’, and ‘Eden’. Khaled swerves off the main road and we bump down a long dirt track and pull up in what we hope will be ‘Paradise’.

And once settled in over sage tea and (for those interested) speedily scored some grass from virtually any member of the friendly young staff, and having taken a first glorious dip in the refreshing, clear, buoyant water, Sinai’s magic begins to permeate and the outside world fades into insignificance. The border has been crossed. 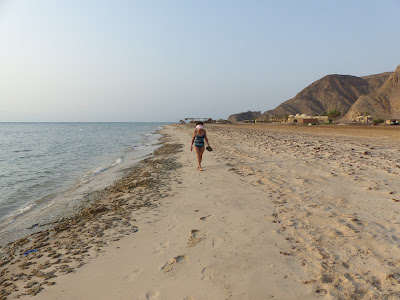 Charming, vivacious, in dressed-to-kill beachwear, Heba is chatting in Egyptian- Arabic accented English with two musclebound Israeli guys who answer her in American-accented English. She’s telling a convoluted story about an embarrassing encounter and they are nodding sympathetically. Later we strike up a conversation with her ourselves and discover that Heba, who has “lots of friends in Tel Aviv”, is a yoga instructor who has studied in India and runs a studio in Cairo where yoga is increasingly popular. She discovered yoga only after her children graduated from high school and loves to visit Sinai, despite the gruelling 8 hour bus journey.

These conversations with the outgoing and obviously liberal Heba were less interesting for their content than for the fact they took place at all. In all the years (over 30!) that we’ve been visiting Sinai, this has been the longest conversation I have ever held with an Egyptian tourist to Sinai. Over the last few years we’ve seen an increasing number of young, cool Cairenes at the Bedouin-run beach camps we favour.  The two sides-  the Israelis being in the clear majority - normally keep a respectful distance but now and then a remarkable person like Heba is able to break the ice. Since Egyptians are strongly dissuaded from visiting Israel and most Israelis would feel unsafe in Cairo, the south Sinai coast is perhaps the only place in the region where they can meet.

Heba sets her smartphone to video on the low wooden table and angles it into a frame created by the low wall of the zula and palm fronds of its roof, with the sparkling Red Sea as background. Then, her dark blue wrap fluttering dramatically in the wind, she seems to elevate horizontally with only one hand resting on the wall.

We lie on our backs, stargazing, wavelets lapping at the sand, a balmy caressing breeze.  The firmament of stars numbs us into humility in the face of an infinite universe.

Behind us in the zula, a group of young Bedouin men accompanied by a darbuka and an oud, start singing a traditional song. The long, snaking, hypnotic piece is the perfect soundtrack. Click here  for a taste of traditional South Sinai Bedouin music.

Later, a hyperactive Israeli man we’ll call Tomer, plugs in a Bluetooth speaker and the tranquillity is shattered by the thumping repetitive beat of an Egyptian hit with lyrics that sound like “mashi mash , mashi mash.” Soon he’s dancing with the young Bedouin in robes. The young Israelis lining the zula, which is now a disco, join in, complete with whoops of delight, hand claps and laughter.

If you’ve been wondering what pop music from the Arab world sounds like nowadays here’s a link.

Tomer, accompanied by his two young boys, is smitten with the Bedouin (“There’s so much we can learn from them, brother”) and talks up the idea of moving his whole family from the Israeli rat race to the tranquillity of Sinai. He also seems to be on the make, conspicuously ingratiating himself with the locals and acting towards the visitors as if he owns the place.

We hear more of “Mashi mash” and its sister “Heya hey” over the coming days and decide that we’ll look for a quieter place next time. 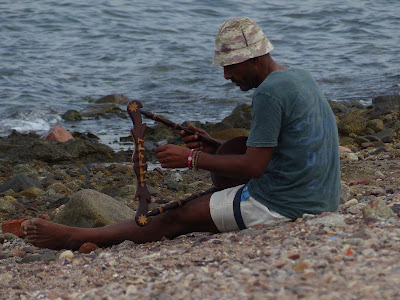 No dancing for Bedouin women though. Nor are they to be found among the kitchen or cleaning staff. It’s only along the beach that we meet them, swaddled in dark layers, carrying one bag on their heads and another in their hands. They find a place in the shade and spread their wares; colourful ornate plastic necklaces and bracelets, fabrics and clothes, a long embroidered dress, a kufiyah, a sha’awal, a gellabiya. Once they have made contact, they are charming but determined salesladies. It’s pleasant to sit on colourful rugs in the shade of the zula, sift through their merchandise, and bargain playfully with them in basic Hebrew as they laugh behind their veils.  A waiter from our camp brings them some food. Later we see them kneeling in prayer and then taking a nap.

Gaggles of boys and girls aged from about 7 to 12, are also part of the operation and will not hesitate to use emotional blackmail to make a sale: “You bought from Mohammed and Jud, but not from me!” they complain in Hebrew. We  agree to make more unnecessary purchases on condition that they use the money for school books. They nod solemnly that they will. We give them Bamba and pens for the madrasa.

We interact with these friendly Hebrew-speaking Egyptian Bedouin on a superficial level without understanding their lives, their codes, their tribal laws, how they've been impacted  by the 21st century and by government discrimination.

If  Bedouin women are allowed to sell jewellery to tourists on the beach, why are they not allowed to work alongside men in restaurants or shops? How would a man like Sayid, the worldly, dashing manager of our camp who alternates between flowing robes and cutting edge western fashion and has sped off to Cairo in his new BMW, relate to his wife, to his daughters? 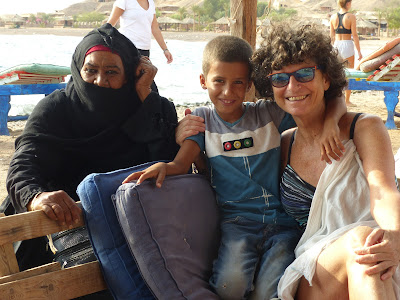 5. A trip to Nuweiba

The taxi is two hours late. The driver looks friendly but speaks no Hebrew. I’m sitting next to him and we are all speeding recklessly towards Nuweiba City when we encounter a truck ahead of us. The driver sits on its tail. We approach a blind curve. The driver looks at me with a mischievous gleam in his eye signifying, “Whadya say? Shall I overtake the truck and risk it?” “No, no!” I gesticulate wildly, stay in your own lane!” The driver regards me piteously, revs up the engine and overtakes the truck. I try not to look. We swerve round the curve with no margin for correction and are not killed in a horrific and totally avoidable accident. The driver displays a smug  victory smile.

Nuweiba is a town shut down. In the dusty old bazaar area there are more souvenir shops than tourists. Inexplicably, Nuweiba’s northern and southern parts are divided by about 5 kilometres of emptiness which we drive across to reach the grubby port area for a meal at Doctor Shish Kebab where we are the only patrons. Soon it will be Rosh Hashana and thousands of Israelis will start streaming into Sinai but it seems unlikely that Nuweiba, with so little to offer, will be reaping the benefits of their cash. 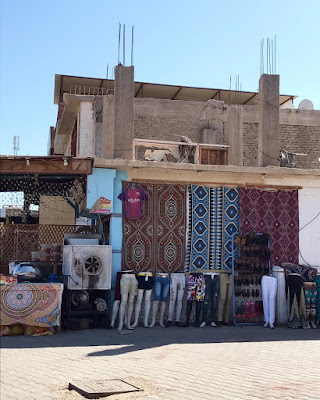 After a depressing urban experience it feels wonderful to return to nature. A wallow in the sea, a walk along the beach in the twilight, crabs scurrying from their holes into the water, mountains growing darker by the minute, the windsurfer skipping across the waves for the last time today. 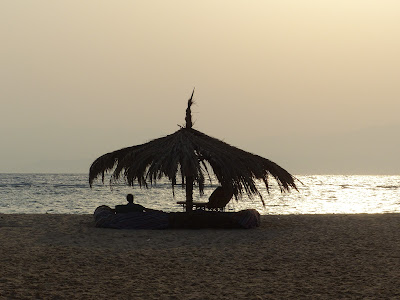