London: Brexit for ever and ever?

Landing at Luton airport felt like falling from the skies slap-bang into the middle of a post-no-deal-Brexit worst case scenario.

On the runway a metallic voice on the PA told us that Luton airport was in the midst of an emergency and that disruptions were to be expected. Power lines had been cut all over the country and unusually heavy rain had penetrated the airport’s roof, flooding the floor below. Delays were to be expected. We were 9th in the line of waiting planes .

After finally disembarking, we shuffled, in an endless crush, for our passports to be stamped by overwhelmed immigration officials.  All in all it was a dramatic entry to the UK: disintegrating infrastructure, bureaucratic muddles and climate change shocks all rolled into one.

That initial impression was quickly dispelled as we wandered around the streets of London.  With the prospect of crashing out of the EU without a deal looking ever more likely, Brits may be deeply divided, confused and even desperate as the October 31 deadline for Brexit looms; but there’s little sign of any of this in London’s bustling streets.

I had heard that, fearing food shortages, citizens were stockpiling food but as we lost ourselves along the aisles of a major Waitrose supermarket, our provincial eyes dazzled by the tasteful superabundance, the idea of stockpiling seemed laughable.  Nevertheless, according to one report

“Britons have spent £4bn stockpiling goods in preparation for a possible no-deal Brexit . One in five people are already hoarding food, drinks and medicine, spending an extra £380 each, according to a survey by the finance provider Premium Credit. The survey found that about 800,000 people have spent more than £1,000 building up stockpiles before the 31 October Brexit deadline.”


Could this relative trickle turn into a tsunami of stockpiling? It could, according to Amatey Doku, former vice-president of higher education, National Union of Students. Asked “the big Brexit question – where will we be by the end of the year?“ by the Observer, she said:

“No deal will be felt much sooner than we expect. If it is averted, it is likely that it won’t be until the last minute. By that point consumers will go into a panic and start stockpiling food…I think the UK will see the biggest demonstrations in its history […]”

Meanwhile, ahead of the reopening of parliament in early September and with PM Boris Johnson’s majority hanging by a thread, reports emerged from Westminster, of a so-called “rebel alliance” to force him to at least delay leading the UK off a cliff. A Tory minister trying to coordinate these efforts noted that this “unholy coalition” consisted of members from, “moderate Labour, Labour frontbench, Lib Dems, Scottish Nationalists, minor parties, independents and moderate Tories. It’s difficult.”
And there I was thinking that Israeli politics was fragmented.

One of political scenarios the rebels are considering involves a “breach of convention” in which backbenchers would “seize the parliamentary timetable” and pass their own laws, independently of the government (!!). Whether or not this comes to pass, the very mention of such an unprecedented step is an indication of the depth of this great rift in British politics.

On this trip, prices in London were suddenly cheap. With sterling having fallen against the shekel, food, theatre tickets, clothes were all relatively inexpensive. We were able to enjoy some excellent theatre and music in London for significantly less while the Brits travelling abroad are already paying significantly more for their euros or dollars.

No-one knows how all this is going to end. Worse still, it may never end at all. As Jonathan Freedland explained in the Guardian in a piece subtitled, ‘this nightmare will go on forever: “Unless we call the whole thing off, this is our future: leave v remain, remain v leave, Brexit for ever and ever.”

Can there be a friendlier people than the Irish? In Israel, people pass each other in the street with, at best, an air of indifference. In Ireland, people will greet you from the other side of the street with a friendly wave. Everyone seemed more than happy to chat, to help, to share a joke.

It rained every day. But between the showers came sudden bursts of sunshine.  We drove (on the left) along shady single lane country roads of  County Galway, entranced as the clouds scudded over fields and forests succored by abundant rainfall into endless shades of green. The rolling hills were studded with contented sheep and cows grazing in the open pasture and all seemed well with the world. 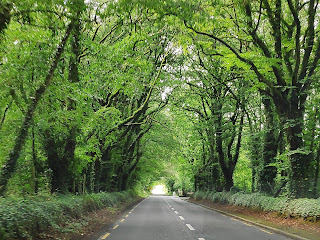 Along the way were neat villages with many well-kept modern houses, some of them quite grand with expensive cars parked in the drive. Even in this rural area it was clear that Ireland (termed the “Celtic Tiger” in the late 1990s –late 2000s boom years) has come a long way since the 1960s, when, we were told, many homes lacked electricity or running water.  The Irish economy is still relatively strong (4% growth this year, a predicted 2.7% for next) but given its close trading ties with Northern Ireland and the UK, economists are warning that a no deal Brexit could radically change the picture.

Meanwhile, on the tranquil banks of Loch Derg, more important matters were at hand. The neighbors of our gracious hostess, tethering their fishing boat to the jetty, offered us two freshly caught pike for supper.  How could we refuse?

The City of Galway was lively and charming. The Atlantic coast was dramatic and squally and if you ever find yourself in the lovely village of Terryglass in County Tipperary, Paddy’s is a must. 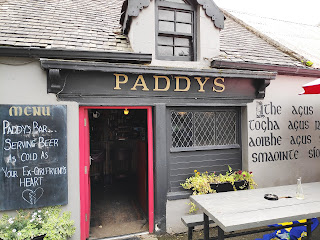 It was only while listening to the radio on the road back to Dublin that the Brexit drama raised its ugly head again. The (Irish) Sunday Times had obtained a full copy of the UK’s classified “Yellowhammer” report on the expected outcome of a no-deal Brexit. Among other disastrous predictions this included [an expected] “return to a hard border in Ireland as current plans to avoid widespread checks will prove “unsustainable”: this may spark protests, road blockages and “direct action”.

Thanks to the 1998 Good Friday agreement the population of the two Irelands, particularly the nationalist Catholics, have been traveling and trading freely across the border. A hard border would not only seriously complicate trade, it could also lead to violence. Our Dublin taxi driver told us that some nationalists had already planted a “warning bomb” some weeks earlier.

Ireland has a long and bloody history but this short film might help to explain why the question of what happens at the border is so crucial.

Border flare-ups are not the only concern, the economic implications are no less daunting. According to the Irish Independent, ministers fear that the country will be plunged into a ‘major national emergency’ in a no-deal Brexit. One editorial referred to Ireland as a “tethered sacrificial lamb on the battlefield, as our nearest ‘neighbor’ goes to war with the EU,” and bemoaned the country’s lack of preparation for the worst.

Dublin on Sunday evening was buzzing but, unlike London, not cheap. We’d learned that we’d be arriving just in time for the “Irish Superbowl”, the 2019 All-Ireland Senior Hurling Championship Final, a uniquely Irish event. The two sides, Tipperary and Kilkenny, were considered finely matched. In ‘The Bleeding Horse’ (don’t ask) we joined the friendly locals in watching what one of the most exciting sporting events we had ever witnessed. Playing before 85,000 spectators at Dublin’s Croke Park stadium, the two sides swerved, crashed, passed and dribbled non-stop, while balancing the sliotar (ball) on their hurls (bats) before aiming for a goal. 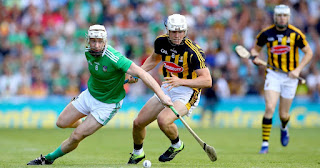 What a game, and it’s an amateur sport too. (for hurling see here).

A triumphant Tipperary defeated Kilkenny by 28-20.

And at least for those riveting 70 minutes, no-one in Ireland was worrying about Brexit.