A trip downtown
We are staying with our gracious Filipino hosts in Santa Rita, a suburb of Olongapo, a city of about 240,000 situated on the coast, a two hour drive north-west of Manilla. The street outside the family compound is buzzing. Mom and pop stores and street restaurants are doing brisk business. By 11 a.m. pupils in school uniforms are returning for their lunch break after starting at 6 a.m. A peddler yells “taho!” - a popular breakfast drink made of silken tofu and tapioca pearls. There’s plenty to see here but today we’re going downtown. 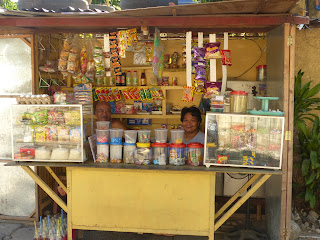 Getting to downtown Olongapo involves two trips using public transportation, first by a motorized tricycle or tuk tuk taxi and then by a jeepney bus (originally made from leftover American jeeps). Both vehicles are canvases for the Filipino art form of kitsch decorations that add anarchic flashes of colour to the streets.  Many of them also carry the uplifting municipal slogans – “Transparency and Good Governance”, “Aim High Olongapo” - to be found on available spaces throughout the city.

In fact, my first impression is that Olongapo municipality is expert at window dressing, not only via the ubiquitous inspirational slogans but also for example by lining the badly lit streets with massive electric red hearts in honour of Valentine Day. This, in a bid perhaps, to cover up the less attractive sites of neglect and disrepair? 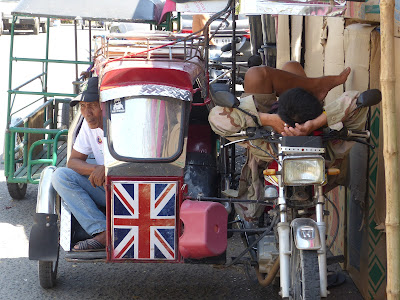 M. an Olongapo native now living in New York notes, while scrunched into a jeepney, that while public transportation in the Philippines is uncomfortable and polluting, it’s also cheap and readily available. If you miss your train in New York, you’re looking at an expensive Uber ride home, she says. Here you can pick up a tuk tuk in a jiffy for a few cents. 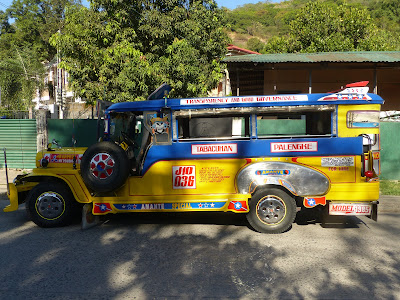 Passengers get on and off, money is passed along to the driver Tel Aviv sherut style. An older man gets on and sits opposite M. It’s her godfather, a respected teacher, and she places his hand on her brow as a sign of respect for her elders.   Later a young person does the same to me. Unused to such demonstrations of respect, I’m taken aback.

The big public market has plenty of attractions, especially in the food section but before long the heat, noise and pollution in the chaotic streets are taking their toll and M. leads us across  a river into a much quieter zone.

This is formally known as the Subic Bay Special Economic and Freeport Zone and until 1992 was the site of a massive US naval base. No fuel-guzzling jeepneys and noisy tuk tuks here and no shanty towns either. Instead, gleaming white taxis and expensive SUVs glide along wide straight roads lined with malls, cinemas and restaurants and the offices of international corporations. The Freeport is now run by a special authority which “provides tax and duty free privileges and incentives to business locators in the special economic zone.”  There are guards at the entrances and the entire area functions under its own traffic rules (First to stop at a junction, first to go). 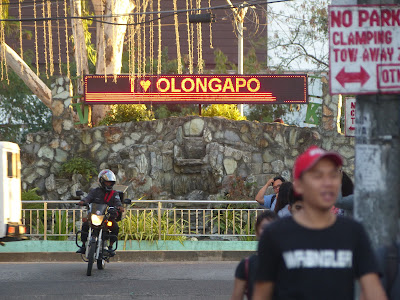 To my eyes, the contrast between messy, rundown, Olongapo and its sanitized neighbour Freeport is blatant. A swanky “international” showcase on one side of the river and its poor cousin on the other. But a bit of digging reveals that the departure of the Americans that allowed the Freeport to be established was actually instrumental in turning around Olongapo’s fortunes. In the 1960s when its bars and brothels served thousands of US servicemen, Olongapo was considered “sin city”. Yet today it is considered a national “model”, known for its “innovative methods of urban management” and is the recipient of numerous awards.

So much for first impressions. 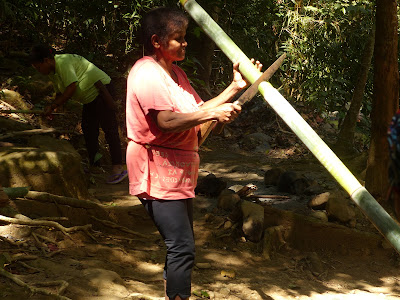 A short drive from Olongapo city, leads us into a lush tropical forest. We stop at a spot called Pamulaklakin, the home of an indigenous family group belonging to the Aeta people, themselves belonging to the wider Negrito group, one of the Philippine’s many ethnic minorities and sometimes referred to as the aborigines of the Philippines. Our hosts have developed a close relationship with them and have arranged a cook out. We bring the food, they cook – indigenous forest-dwellers style.

We traipse down a path accompanied by two friendly indigenous ladies with fearsome machetes tied to their waists, cross a bridge and set up camp alongside a stream in a shady area with a few tables and benches.

The ladies disappear into the forest. Chopping sounds. The ladies reappear clutching long poles of bamboo which they now expertly lop into cooking sized cylinders. Short and very accurate cuts create a replaceable window for cooking rice. Another few cuts produce bamboo tongs for handling the food. We are amazed by their expertise.  A fire has been lit and the bamboo ‘pots’ have been filled with mussels, pork, rice, fish and vegetables. They simmer on the fire while we paddle in the sun-dappled stream, dazzled by the butterflies and water insects.

Soon, the food is poured out of the bamboo cooking pots, we share a delicious meal and offer our compliments to the proud chefs. The organic leftovers are gathered in banana leaves and buried.

I hear later that there is a community of displaced indigenous people living in Olongapo City where they live in poor conditions, among other things, because of their limited skills. We westerners wouldn’t last a week in their forest while the ostensibly “primitive” Aeta ladies who efficiently cooked a meal for 12 people using only a machete, could only feel redundant in a modern shopping mall. This is one country with different groups of people living in vastly different stages of development. 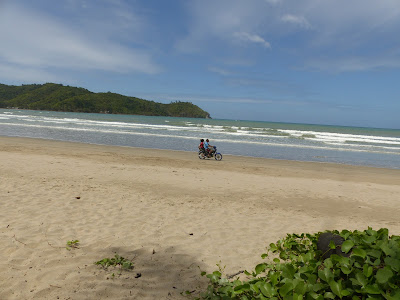 We are in Bucana, a fishing village perched along the mouth of a river in the El NIdo District of Palawan Island. We have already spent a few days exploring this beautiful coastline with its archipelago of unpopulated islands rising dramatically from the sea. Island hopping for tourists is a mainstay of the local economy and we hear that obtaining a license to operate a tour boat can take years. As everywhere else, it helps to know the right people.

Now on our last stop in Palawan, the idea is to just chill and read in an isolated spot with no commercial distractions. Bucana certainly fits the bill. The river cuts the village in two and crossing it to get to the beach involves us carrying our luggage over a hanging bridge made of planks and twisted wire. 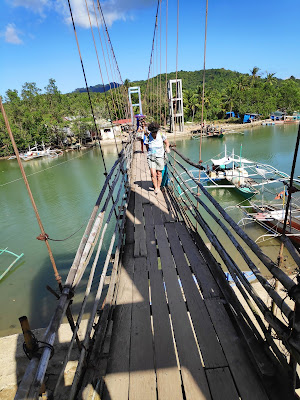 Safe and sound at Zhaya’s Beach and Cottages (recommended), one of only three simple camps on the long, unspoiled beach, we can unwind in the shade of the coconut palms and observe life at our leisure.  The beach is a thoroughfare for the people living along it and for us observers provides a clean, backdrop that focuses the eye on whoever happens to be crossing it at the time: a family of four on one motorbike; a gaggle of children chasing a dog wearing a dress; a lady carrying a parasol or a water buffalo dragging a sled laden with bags of rice and a little boy. 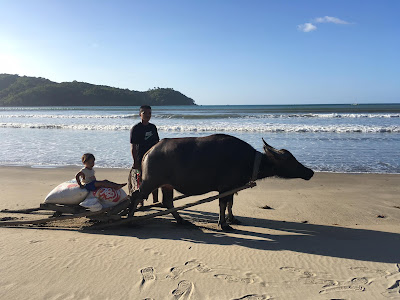 We wander along the ramshackle lanes of the village between the tin and palm frond dwellings and simple shops all selling the same snacks and drinks, say hello to the friendly barefoot children who ask “What’s your name?” in English. I take photos and the kids are happy to pose but at some point I feel uncomfortable wandering around this “authentic” but abjectly poor village with my fancy digital camera like some western colonialist documenting the “natives”.

Not that the people of Bucana seem unhappy. The children in particular, here and in other rural areas we visited, are often seen in little giggling gangs, deeply engrossed in games involving little more than a wheel on a stick. Even without understanding Tagalog you could see that they were actually using their imagination to play. Sometimes, less can be more. 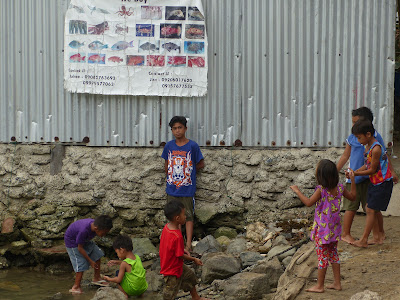 As I watch the fishermen putting out to sea in their simple bangka boats in a scene that might not have changed for centuries, I pan to a woman peering into a smartphone outside a family shop and then start spotting the TV antennas on the rooftops. Bucana is not disconnected from the outside world. It sits on the border between the traditional and the new and seems to accept both with equanimity. 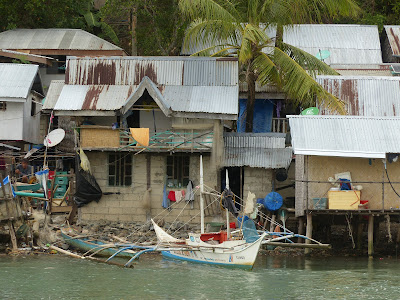 Everywhere we went in the Philippines we met warm and friendly people and were often struck by their humility and modesty.  Life is hard for so many of them yet they seem to face it with a fatalism and a carefree attitude, alongside a deep attachment to family and friends, that we spoiled westerners could find instructive. 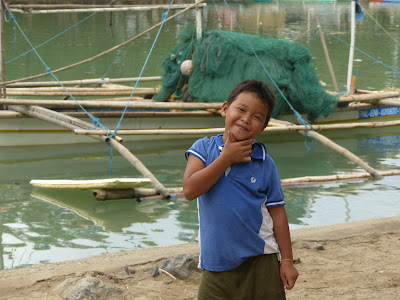 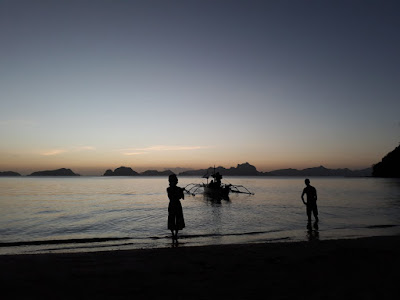 Grateful thanks goes to the De Jesus Lumibao family for their generous hospitality.