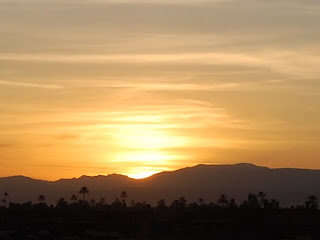 The view from my hotel window of dawn rising over the Atlas mountains is a censored one. Had I pointed the camera down a fraction the first rays of the sun would have caught the empty street below my hotel room. This was punctuated by large holes in the asphalt made for some unknown purpose and now forgotten. On the other side of the road you would have seen a row of shuttered, empty shop fronts and in the mid-distance the ochre turrets and minarets of the Disneyesque new hotel area that is being flung up to accomodate the stream of tourists mainly from Spain, France and the UK.
I wondered whether the style of these hotels, with their acres of mosaic tiles, arches and intricate latticework wooden panels reflected what the Moroccan architects wanted or what they thought the tourists wanted. 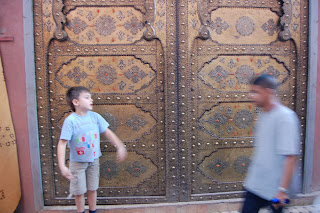 A nerve wracking, seatbeltless taxi ride gets you the Medina (walled old city) which is where the real action is. Magnificent gates like the one in this picture open out into dusty, unpaved alleyways. Not all the gates are this magnificent. 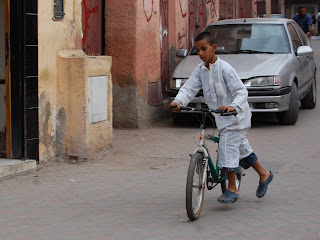 To say that the Medina is where the old mingles with the new is a cliche so instead I'll just ask you to note the Crocks on this boy. 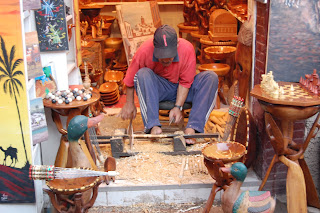 There seem to be two main types of souk. Those that cater for tourists and those that cater for the locals. Parts of the former category are an explosion of colours. The brain struggles to take in the flood of carpets, fabrics, intricately decorated wood products, lamps, jewellery, pottery, furniture and much, much more. Here, an artisan is using a foot lathe to carve skewers, probably an old tradition but his work is now designed for western tourists. There's still plenty of 'real' life though. Next door, you'd find a butcher or a hairdresser or a tailor which serve the local residents of the crowded Medina. In the second category - the souks for the locals only - you'll find a much greater preponderance of designer ripoffs, flashy watches and cheap shoes. In other words while the souk for the tourists is dubiously "eastern", the souk for the locals is definitely western. 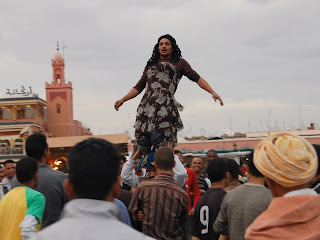 It's late afternoon in the Jema'a el Fna, the massive square that leads into Marrakech's many souks. The mobile open air restaurants are setting up for business and Marrakech's female impersonators are warming up the crowd. As darkness falls they are joined by snake charmers, monkeys on chains, tea vendors wearing Moroccan sombreros, bands of musicians (banjos are popular), storytellers and turban-swathed crones selling false teeth, ostrich eggs and all manner of unctions and ointments. 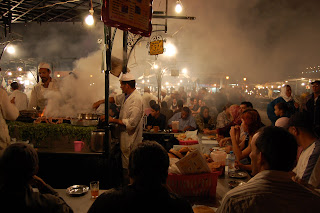 One thing I like about this noisy, smoky, tumultuous chaos is that the crowd is largely made up of locals, out for a cheap night on the square. Many of the tourists prefer to watch from a safe distance on the observation balconies of the restaurants lining the square. I also found it intriguing that so many young Moroccan people in the crowd seem to be enchanted by the long-winded tales of the story tellers and the bawdy humour of the actors/clowns. At home, even if it's a simple one, they can flick on their TVs and see much more sophisticated fare but they don't seem to have lost their taste for a simpler type of entertainment.

The nightly party on the square predates tourists, is partly fed by tourists but doesn't seem to depend on tourism for its vitality.