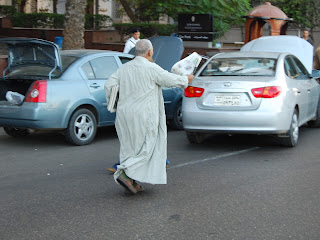 Newspaper seller, Cairo, 2008
"They r coming. The people r coming. This is growing," wrote Egyptian blogger Sandmonkey 4 days ago, on  what was apparently one of the last posts to come out of the country before the regime shut down the internet. But the word got around nevertheless and Mubarak's days (maybe hours?)  seem numbered. 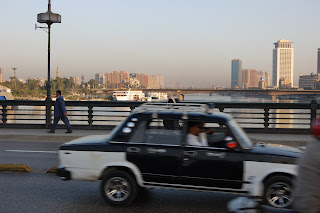 Cairo bridge 2008
Groaning under the weight  of 30 years under Hosni Mubarak's oppressive regime and frusrated by empty promises of reform, inspired by Tunisia's 'Jasmine Revolution' and mobilized via Facebook, Egyptians are now bravely demanding that Mubarak step down.

A recent article on Egypt and its future by Terry Newman, a business consultant who works throughout the Middle East, failed to predict the revolution but offered some interesting data on why it  may have erupted. Approximately one quarter of Egypt's population of over 80 million are aged between 18 and 29.  $200 per month is considered a good salary. While economic growth has been fair, the gap between rich and poor has grown. Still, 16.5 million users have access to the internet, a threefold increase in the past 3 years."The ability of different opposition groups to organise has increased in tandem. Egypt's population is now better educated, more connected, and more exposed to the external influences of the outside world than at any time in its history." 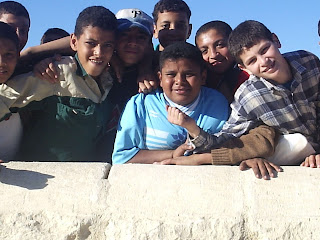 Egyptian boys near Cairo, 2004
Anybody who has visited Egypt and has been affected by the spirit by the Egyptian people can only wish them luck tonight. Perhaps some of these kids are among the demonstrators? 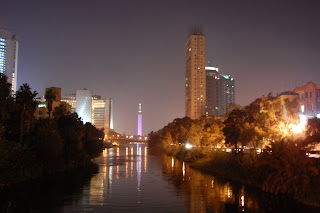 Nile view 2008
All this is bound to affect relations with Israel as well. Under Mubarak these have been cool but correct with both sides maintaining a common front against common enemies like Iran and Hamas.

Under a different leadership relations could suffer. Terry Newman's reasonable prediction is that, "the overall strategic alliance between Egypt and Israel is likely to endure, not least due to US pressure and the billions of dollars in aid that both countrries receive as part of a the peace treaty." 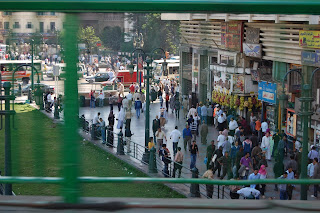 Cairo street taken from a taxi on an overpass 2008

Egypt, our big neighbour, still the leader of the Arab world, needs to be fed, housed, educated and employed at a decent level. No less important it seems, a young wired generation wants its voice to be heard. 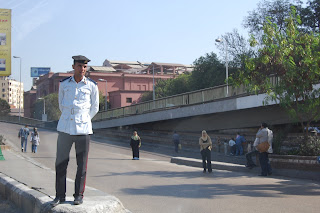 How the internet generation will link up with the other disparate elements in Egypt (the Moslem Brotherhood in particular) to create a new political landscape, remains to be seen. A lot may depend on the army. Will it defend the establishment, or set out to change it?

Email ThisBlogThis!Share to TwitterShare to FacebookShare to Pinterest
Labels: Egypt 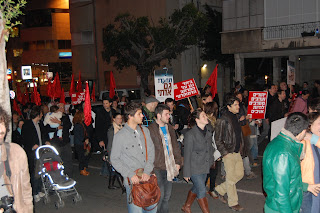 'Interrogate Me Too', 'Jews and Arabs Refuse to be Enemies', "Together We'll Protect the Democratic Space", 'Fighting for Democracy', 'The Geneva Initiative', Hadash, Peace Now. Just some of the banners held by some of the 15,000 or so demonstrators in Tel Aviv protesting the current wave of McCarthyism, and racism sweeping the country. The left, such as it is, got mobilized. 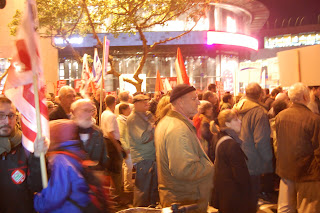 There were plenty of grey hairs among the marchers. 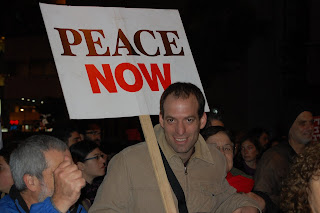 As well as some Anglos. 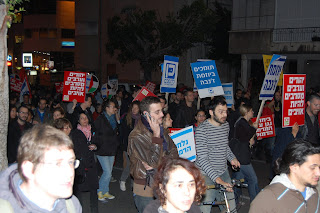 Although most of the marchers were young. 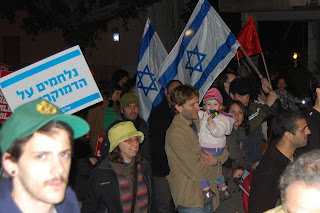 And one was very young. 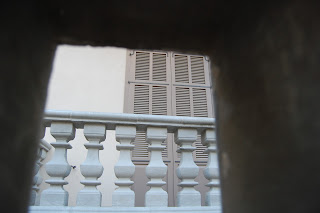 Levi Yitzhak is a company well known for producing hamechiron  , a listing of prices which is the bible of the second hand car sector. A few years ago it moved into the flourishing real estate field. Recently, it estimated that about 10,000 "ghost apartments" scattered throughout Tel Aviv were left locked and shuttered for most of the year. Nearly all of them had between 2  and 3.5 rooms and sold for 2-3 million shekels ($500,000-$750,000). Had they been on the open market you could have rented them for NIS4,300 -NIS6,500 ($1,100 - $1,600).

But you can't rent them because their owners are foreign residents who need their holiday apartments to be available for the next weekend getaway or month-long holiday. And since they don't lack the money, they don't rent out their apartments. And since they don't rent out the apartments there are significantly less apartmnents for rent, which is turn raises the prices of the apartments that are available. The result is that the locals - especially the students and young couples who make Tel Aviv the vibrant city it is - are being frozen out of the city. 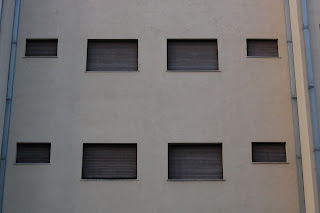 It turns out that the largest single group of buyers are French Jews who prefer the "old north" area , especially the streets leading to the sea like Gordon and Bograshov. The Americans prefer the "new north" , Ramat Aviv and Kochav Hatzafon.  But overall, the most popular areas for foreign home buyers is Rehov Hayarkon (on the seafront), Sderot Rothschild (smart and swanky) and Neve Tzedek (romantic - the home of the Rooftop). The wonderful but neglected old buildings in these areas have been restored and wherever the developers find that they can buy up and demolish entire blocks, they are building gleaming residential towers on them. But how many of these are left empty for most of the year, emptying out the city centre instead of filling it?

Another group of people changing Tel Aviv's demographics are the migrant workers and asylum seekers from Africa that are streaming into Israel across its long border with Egypt. Many of them find their way to south Tel Aviv and are doing menial jobs across the city. The large numbers of immigrants concentrated in the poor neighbourhoods of the south have set off a racist backlash fanned by rightist Knesset members. 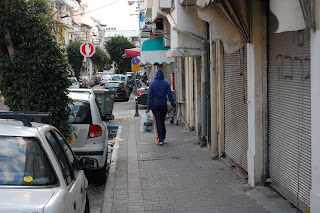 An African immigrant collecting bottles for the deposit in Florentin

Tel Aviv wants to be recognised as a 'global city' and the muncipality has even opened a new department to promote the campaign.  Global city or not it is certainly being buffetted by the forces of globalisation that are transforming the human landscape before our very eyes. Constant change though is in Tel Aviv's genes.
at January 08, 2011 1 comment: 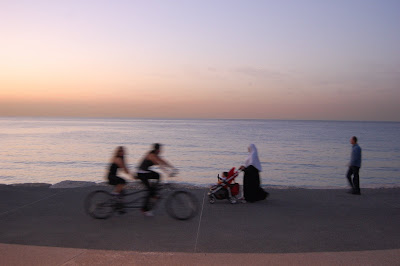 Shana ezrachit tova (a happy civil New Year) is what (some) Israelis say to each other in the run-up to January 1st.This is of course to distinguish the New Year that the rest of the world is celebrating and the Jewish New Year of official, Hebrew, Israeli culture. This year's Israeli calendar started on Rosh Hashana or alpeh be-tishrei in the Jewish clandar which happened to fall on September 9 . Since Israel needs to live alongside the rest of the world, we keep both calendars.

But a "happy civil new year" also struck me as a decent wish for the coming year because the notion of 'civil' so lacking in our discourse. Political and social processes have led to a fragmentization of society into niches (Jewish, Arab, secular, religious-Zionist, haredi, rich/poor etc.), each of which lives in its own segregated society. In such a world, Arab ladies pushing prams do not have contact with people who ride tandems, except when they happen to pass each other in a shared public space. With nearly 50% of Israelis agreeing with a gang of rabid rabbis that it is forbidden to rent apartments to Arabs, a civil new year in which 20% of the population are treated as though they are part of society would be a refreshing change. 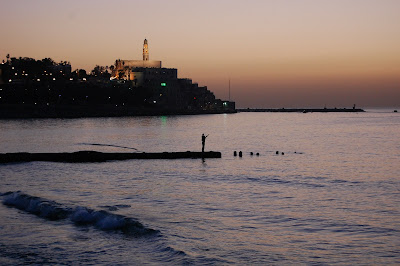 Is it just me, or at the end of 2010 are people feeling a little isolated and directionless? The non- story of 2010 was the US-led peace process that crashed and burned before take-off. Some are saying that this was the year in which any any lingering hopes for a  two-state solution have finally been dashed.
And if they are right, what does that augur for the future? The settlers (were they that way inclined|) might be raising a glass of Cava to a successful 2010 and an even better 2011 but we might all find out soon that the world is no longer interested. It has more pressing problems. Soon we - Israelis and Palestinians - might be left to simply stew in our own juice. If that happens we may find ourselves on the eastern shoreline of the Mediterranean, peering westwards in vain. 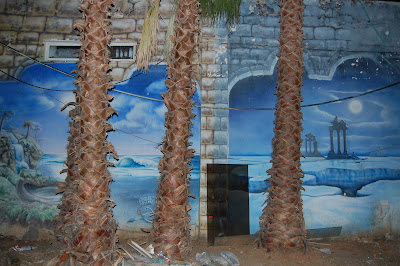 As 2010 turns into 2011, definitions of reality seem more blurred than ever. We spend more and more time in virtual realities - on the internet and on the 'reality' shows that now completely dominate our TV screens. A few miles from the Tel Aviv bubble lie realities that we prefer not to visit. We are aware of their existence but we prefer them not tol be a part of our reality as long as we can keep shut them out. In this country, there are large minorities of people living in alternate realities that, at best, manage to co-exist with each other in an uneasy truce. What is 'real' for one, often seems a fantasy to the other.
So a strange final wish for 2011 is for our perceptions of reality to become closer(and of course more "real')
A Happy Civil New Year
at January 01, 2011 1 comment: