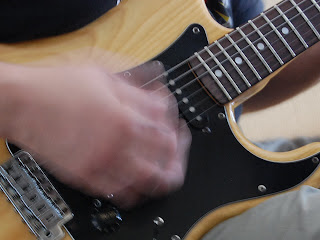 One of the reasons I haven't been  posting recently is the debilitating heat. This  turns the brain into mush and rules out too much physical and even mental activity during the hot'n'humid season. Still, from time to time reality forces you to escape the aircon (home, car, office) and sweat. One of the few good reasons to leave the A/C is music. And so,  a few weeks back, Mid Life Crisis, oblivious to the intolerable heatwave and flying in the face of reason, embarked on a week of intensive activity. 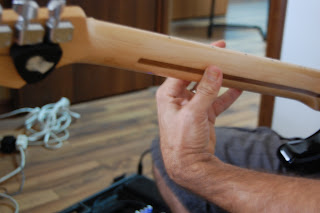 First came a Thursday night gig on kibbutz Maagan Michael at a 40th birthday party. The crowd was techie, and the air was ickie. As usual, we could hear ourselves at the end of the sound check but not a soon as we started playing. By the third number my T shirt was soaked. And there were about 12 numbers. The crowd was a bit flaccid and, with a few exceptions remained  seated. 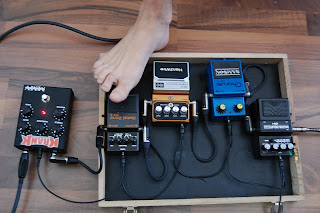 On Shabbat we were performing again, this time in the beautiful back garden of a private house in Rishpon, a moshav situated between Tel Aviv and Netanya. It was even hotter but the hipster 50+ crowd belonged to the rock generation and we played up a storm for over three hours. But playing hard in 80% humidity takes it toll. I must have looked a bit unsteady as I rose from the drum stool since someone came up to me and me if I was feeling OK. A memorable evening. 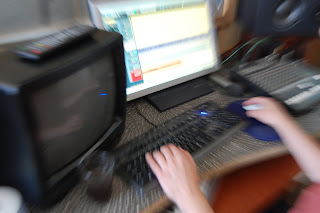 The next day (!), Mid Life Crisis started recording 6 new songs in an effort to 'release' a CD . The photos here are from the last session. Playing live twice during the previous week, made us feel like a real band. It also sharpened skills so by the time we turned up at the studio, we were 'hot'. Stay tuned for news of the album release party.