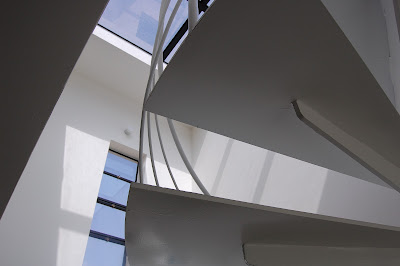 Continuing this series on a few of the hundreds of sites open to the public at Tel Aviv's Houses from Within weekend, we lined up for a guided tour of a newly renovated industrial building on Simtat Chelouche. Although close to trendy Neve Tzedek, this is a pretty desolate spot in an unkempt side road situated in the seam line between the old army museum and Derekh Yaffo. In this setting, the clean lines of the spanking white exterior are especially striking.


This International Style building was not on the preservation list but was nevertheless lovingly restored and renovated. The building was purchased by a group of five friends  who commissioned an architect to create airy, light filled apartments with plenty of shared, communal spaces, like a rooftop garden. 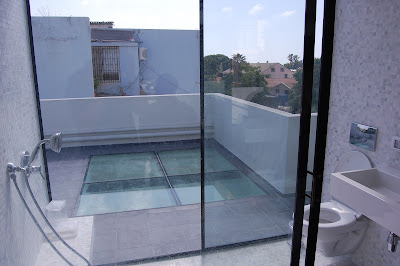 A shower cubicle open to the roof. Behind it you can see a movable skylight. 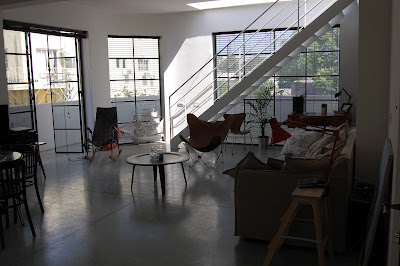 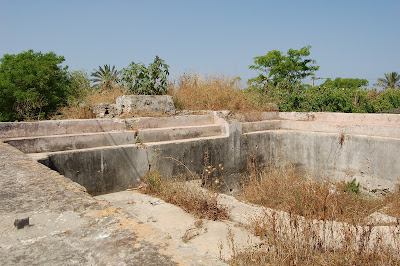 On Day 2 we switched from bicycles to 'Vespa' to visit some sites a bit further afield.  These are pools that once watered the the citrus orchards that flourished around Yaffo at the end of the 19th and beginning of the 20th centuries until they were overtaken by development as Tel-Aviv grew. Their local Arab owners sometimes built "well houses" nearby, some of them in luxurious style.These pools will soon be renovated as part of gan ha-hursha (Grove Garden), a 250 dunam area near the zoological gardens, the Russian Church and the Abu Kabir forensic institute in south Tel Aviv.  In one area, the old irrigation channels will be reconstructed to show how the system worked. The park new park will also be linked to Florentin, creating a much needed green outlet for the south. 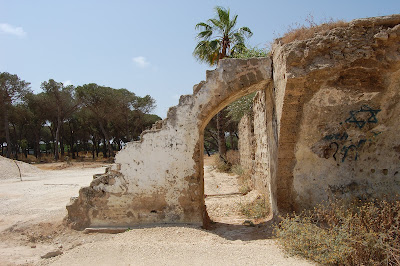 Finally, some of the planting solutions created by an ecological designer called Yael who lives in the outlying suburb of Hadar Yosef in a house surrounded by walls of vertically growing plants. She and her husband imagine Tel-Aviv covered in green walls, some of them edible. Her company designs and markets these vertical growing pouches. The lower photo shows two crates lined from the inside,  filled with compost and sprouting vegetables. It serves as both a planting area and a fence. 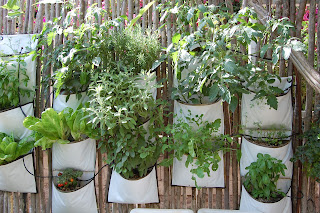 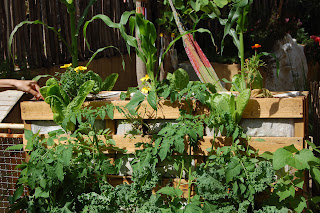 Not shown is a crate of decomposable / disposable diapers, no earth added, also sprouting um....veg... 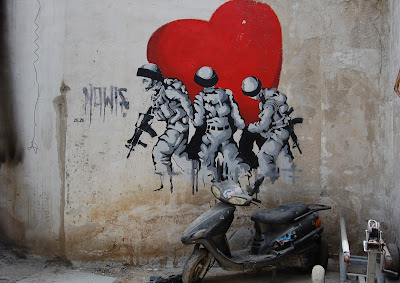 Behind the sleek design studio (see previous blog ) lay a courtyard which, perhaps because of its seclusion had been given especially devoted treatment by street artists. 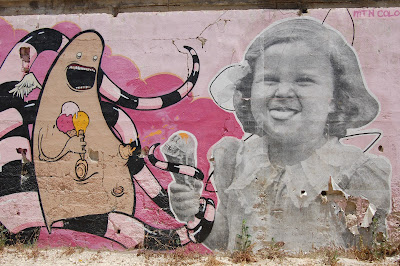 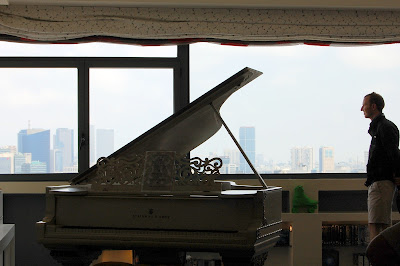 A few blocks away, on the 11th floor of a commercial building on the corner of Shocken and Kibbutz Galuot, pianist Hagai Yuden is ensconced in loft that features a 150 year old Steinway Grand that used to belong to the mayor of New York. 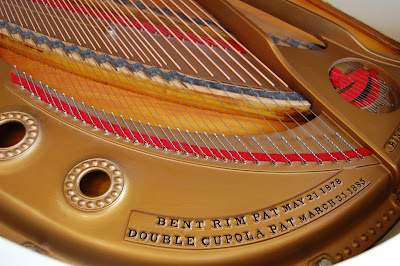 Yuden, who gives piano recitals set against the background of the constantly sprouting Tel-Aviv skyline that can be seen from his panoramic window, also has a view one of his neighbours. 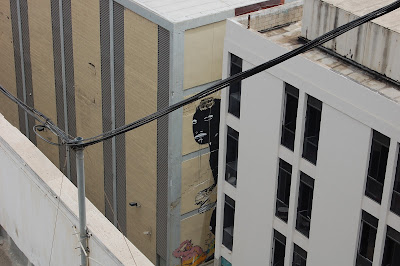 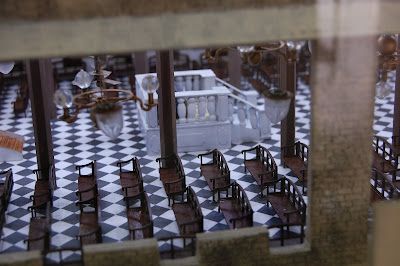 This looks like the inside of a beit knesset (synagogue) and it is: a scale model of the interior of a beit knesset in Aden. It can be found in the museum devoted to the Jewish  community of Aden that recently opened in Lilienblum 5. The museum occupies the ground floor ( until recently, used for storing textiles) of the simple but elegant beit knesset that the architect Yehuda Megidovich designed  for the Jews of Aden who settled in Tel Aviv. 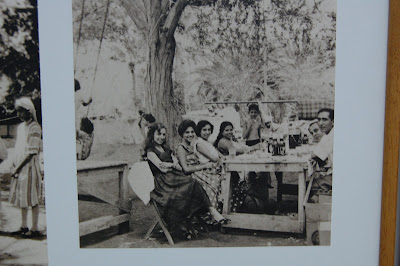 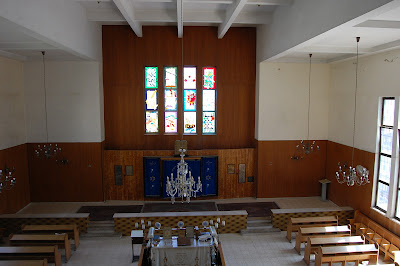 The interior of the Kol Yehuda synagogue taken from the ezrat nashim (women's gallery). The stained glass windows which normally depict the twelve tribes of Israel,  seem to be based on motifs from the country and city in Eretz Israel and have a modernistic feel to them. Since we look at these windows every night from the Rooftop and has never seen them from the inside, it was great to get up close. 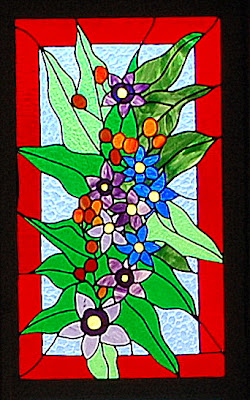 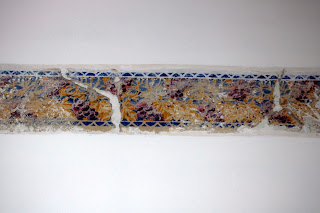 A section of an original wall painting


This isn't the first time that I've done a post on the annual batim mibifnim event ( Houses From Within). But it's such a rare opportunity to see the inside of some of the most interesting buildings and spaces in the city that it's just too good to pass up. So here are a few images from this weekend's harvest, with more coming separately. By the way, just skimming the programme online will give you an idea of the scope of Tel Aviv's architectural and urban treasures. 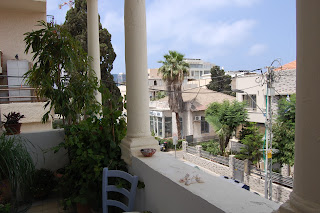 We started close to home, in a building on Rehov Mohliver built in 1926. The couple renting this apartment have done a lovely job of preserving many features of the old Eclectic Style with minimum expense and maximum care and taste. To reveal the lovely old tiles in the photo below they had to scrape away the linoleum that had covered it. 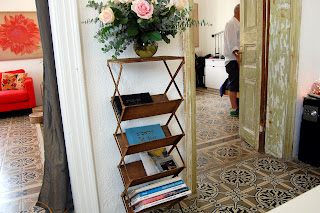 On the top tier of this antique magazine rack sits an original copy of a book of photographs taken by the Avraham Sosskin (1881-1963)  who documented Tel Aviv (founded 1909) in its earliest years. The proud owner showed us that it was signed by Thomas Mann (!). Her husband said that since the building wasn't listed for preservation, he was afraid that it would be knocked down to make way for a new building and all this would disappear. 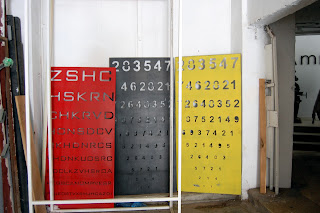 We pedaled southwards, deep into the industrial  area between Salame and Kibbutz Galuot, where all sorts of interesting spaces have been opening up between the factories, workshops and garages.This is the entrance to the Amir Gallery that makes custom made steel designs. 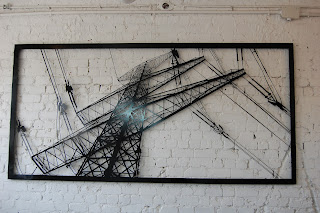 Inside was this photo by Uri Machlev was printed on steel. 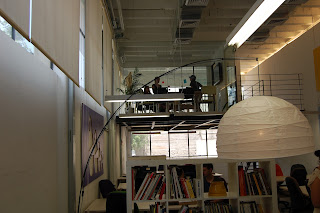 Over the road, this industrial space has been turned into a work space that can be rented by young designers.
at May 19, 2012 No comments: 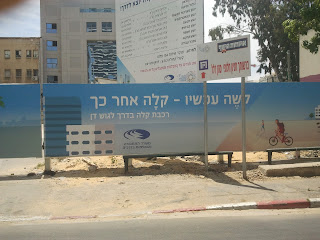 With  trusty Nikon under repair, I've been been relying on my smartphone camera to snap significant moments. Clumsy and slow, it's no replacement but, deeply conscious of failure to keep promise to blog more often (computer also in repair- it's one of those times...),  in the pragmatic Hebrew phrase - ze ma yesh (it's what there is). So, a few days ago I wandered a few yards up the road from the Rooftop and, completely blinded by the strong spring sun, pointed the phone in the general direction of the new hoarding blocking the view into what used to be the Beit Romano car park. The sign informs us that [ it will be] "hard now and easy (light) later" and that "the light railway is on its way to the Dan Bloc." 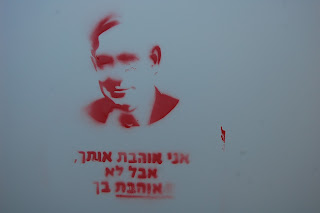 'Hard Now, Easy Later'. First, this conjured up an image of me sitting in the car a few yards from home but blocked by endless lines of trucks carrying mounds of sandy soil. Second, it had  a political ring to it too. The sort of thing a finance minister would tell the public before announcing spending cuts. In fact, the new hoarding covered over an example of a  graffiti tag that has been spotted in the area. This shows Binyamin Netanyahu appearing above cliches like, "I love you but I'm not in love with you" or " It's not you, it's me".  This week Netanyahu stunned everyone by forming a mega national unity government with Kadima just as the Knesset was about to be dissolved for new elections.

But let's get back on track.

The car park, which sits on part of the old Ottoman railway line from Jaffa to Jerusalem, has been closed off and filled up with mobile offices and various piles of equipment for some time and I knew that the area was part of the works for long-awaited light rail system. Still,"hard now, easy later" was unnerving. If the
NTA Metropolitan Mass Transit System Ltd. (NETA in Hebrew) was telling us that it was going to be hard, then perhaps actual work was imminent on tunneling the 'underground' that the Tel Aviv conurbation has been promised since the 1960s.

A quick look at Neta's website (in Hebrew - the English part is useless) informed me that in January the company had issued a massive tender for the excavation of two tunnels, for the underground sections of the Red Line, that will run from Petach Tikvah to Bat Yam via central Tel Aviv and Yaffo and a spit away from the Rooftop. Each tunnel will lie 20 metres underground, will be 11 kilometres long and will be excavated by the same monster excavators that dug the Channel Tunnel!


Although this graphic description added a dash of realism to the planned mega-project,the overwhelming majority of cynical Tel Avivians will tell you with complete certitude that it will never happen. Either the company that wins the tender will go bankrupt or war will break out with Iran or... 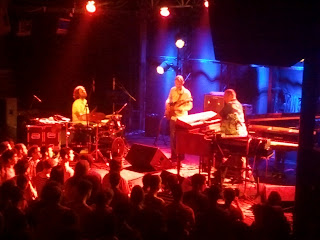 Integrated mass transit system or not, Tel Aviv is still a good place for live shows and even my phone camera can capture some of the atmosphere. Here's the very wonderful Medeski Martin and Wood
who played recently at the Barby. 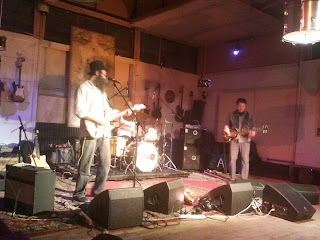 And here's Lazer Lloyd, the Matisyahu of Israeli rock and blues, playing an excellent set from his new Clapton/rebbe inspired album 'My Own Blues' at a cool venue called The Zone (ha-eyzor).
at May 13, 2012 No comments: