I've been hearing tales of woe from Jewish friends in the UK as the fallout from Gaza turned into rallies condemning the "Holocaust" there. They described a prevalent atmosphere, not just of virulent criticism of Israel but also of a frightening anti-semitism. However it took an article by the brilliant Anglo-Jewish author Howard Jacobson to better comprehend the insiduous way that anti-semitism lies beneath the discourse.

http://www.independent.co.uk/opinion/commentators/howard-jacobson/howard-jacobson-letrsquos-see-the-criticism-of-israel-for-what-it-really-is-1624827.html
at February 24, 2009 No comments:

Email ThisBlogThis!Share to TwitterShare to FacebookShare to Pinterest
Labels: anti-semitism

Beginning of the winter

The heavens opened a few hours after Bibi got the nod from Shimon to form a government. "The start of the winter," said the forecaster on the radio in view of the drought and heat this winter.

Maybe Kadima will join Bibi's right wing government and maybe it won't. In any event the situation is critical. As someone wrote in the trendy/lefty Ha-ir local TA paper, it's romantic to be a leftist again, for the few to huddle together in companionship and wallow in the glow of being special. 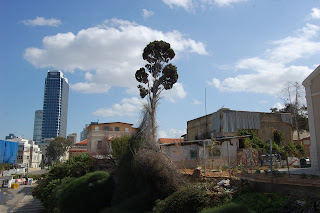 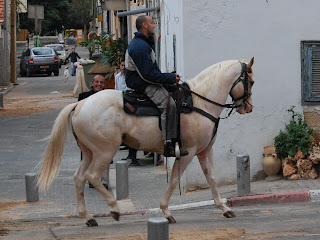 Horses in Neve Tsedek raised a smile from the locals. People stuck their heads out of the windows and strangers started talking to each other.

"The Obama administration has given the Palestinian Authority a "green light" to
talk to Hamas about forming a Palestinian unity government, a PA official in
Ramallah said over the weekend. The official said that Washington had also given Egyptian President Hosni Mubarak the go-ahead to resume his efforts to achieve reconciliation between Hamas and Fatah. "The new administration has a different policy than that of [former US president] George W. Bush," the official told The Jerusalem Post. "The administration of President Barack Obama believes that a Hamas-Fatah government is good for stability."

Since Bibi's election promise was "to topple the Hamas", this does not augur well for future Israel-US relations. And with the possibility of a two-headed government in Israel and a similarly shaped creature in Ramallah, Obama will now have to bash at least four heads together to make some headway. 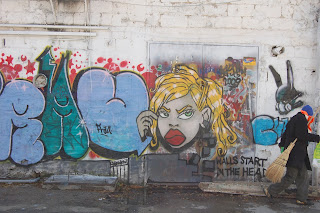 Street art in Florentin. Walls Start in the Head 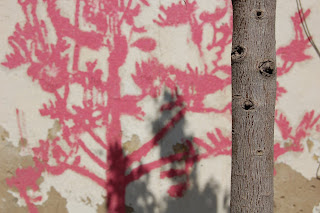 Someone painted a pink shadow behind a tree in Neve Tsedek 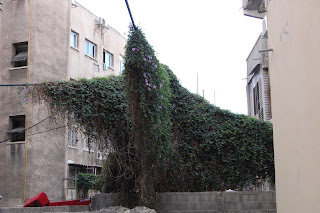 B sent me a film of Tel Aviv in 1938 , part of the Steven Spielberg archives. check it out by clicking the link.
Above: one of a series of photos I've been taking under the working title 'Mad Veg' 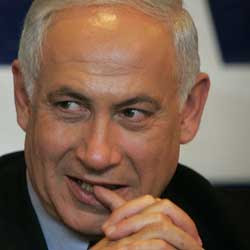 Meet our new (old) leader
The weather yesterday, polling day, was nasty and squally, especially later, when the results started coming in. We spent the day pleasantly enough though. After morning coffee we exercised our civil duty at the polls at the trendy local community centre. On the way we met M, a neighbour in charge of running campaign volunteers at three polling stations for the Meimad-Green Movement Party. He took one last shot at convincing me to vote for them before running off to find more prey (they almost got in). Then breakfast with friends, one of whom was happy that she had decided to vote for Tsipi Livni, since that was the only way of blocking Binyamin 'Bibi' Netanyahu's rise to power. Finally a homewarming visit where politics was off the agenda. In fact, the day passed so pleasantly that by the time the three buildings of the Azrieli centre were lit up to show the exit poll results...(the real thing was in different colours) 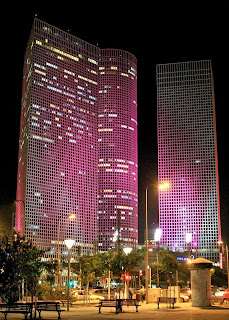 and Kadima squeaked ahead of Likud, it was easy to forget that the figures also showed that the right bloc had a 10 seat lead on the left. Without going into the details, this means that it would take an act of God for Livni to form a coalition. Consequently, the heavy set gentleman below, Avigdor "Yvette" Lieberman , head of the Yisrael Beitenu party is very likely to be Bibi's second in command. Oy!

Worse yet, while Bibi's real desire was to head a centre-right coalition (with Kadima and possibly Labour), since Kadima is demanding first crack at forming a government, Bibi has no choice but to pre-empt it and form a blocking majority of 65 MKs that would include some real headcases in the form of the National Union. In short this would be hard-right/religious government that would quickly collide with the rest of the world.

On the third hand, there are a few cynics on the left who argue that it has to get worse before it can get better. In other words, a dose of international sanctions might be just what the doctor ordered for the populace to wake up to the choice between taking the peace process seriously or suffering the consequences. Since we (and the Palestinians) are incapable of sorting out an agreement, a hard right Israeli government might be the trigger to finally prompt some serious international intervention. 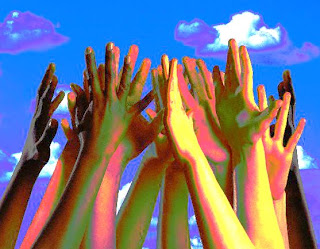 Email ThisBlogThis!Share to TwitterShare to FacebookShare to Pinterest
Labels: elections 2009 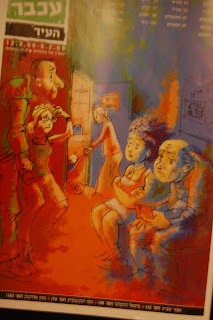 Click to enlarge
Elections on Tuesday. Not much to look forward to politically but at least I'll get the day off. This illustration of voters at the polls on the front cover of Achbar Ha-Ir (City Mouse) guide speaks volumes. With such a poor supply of leadership on offer it's not surprising that many voters are wracked by indecision and doubt.

If in the last post Tsipi Livni was pushing for an immediate and disproportionate response to the truce infractions in Gaza. This week she suddenly started saying that "these elections are all about peace". Yes, the thankfully short election campaign is drawing to a close, and despite the desperate straits we are in, the main contenders are trying to flog us the old merchandise: peace security (and, for the racists, screwing the Arabs) without believing in them and knowing that we don't really believe in them either. In politics, as in advertising, it's all about illusions. 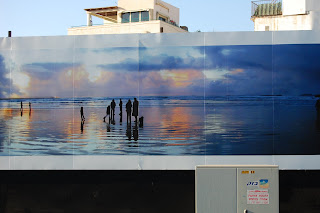 The possible combinations of parties that might form a government all seem to include Yisrael Beitenu, led by Avigdor Lieberman who is picking up votes daily on the wings of a 'No citizenship without loyalty' ticket. Namely his demand, that Arabs (plus leftists and anyone else he doesn't like that day) sign an oath of loyalty to Israel as a Jewish state or lose their citizenship, although not their residency. The popularity of this racist comes mainly but certainly not only from the Russian immigrant community. True, Lieberman's bark is always worse than his bite but if he turns out to be the third biggest party on Wednesday morning it will not be a sign that we are heading for a bright new day. 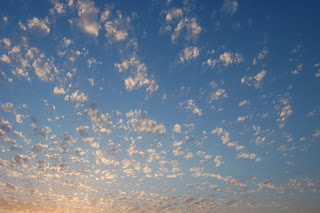 To get your mind off the depressing prospect of a future dominated by Bibi and Avigdor (Yvette) Lieberman, take a look at these inspiring aerial photos of London at night (thanks Steve)

Email ThisBlogThis!Share to TwitterShare to FacebookShare to Pinterest
Labels: elections 2009 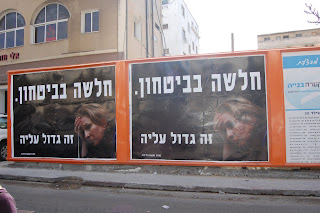 Snapped this billboard of Tsipi Livni yesterday on Rothschild. It shows a tired and confused looking Livni next to the slogan (chalasha bevitachon) 'Weak in Security' and the sub-slogan that would translate into "Her boots aren't big enough" or "She's not up to the job". This is part of the negative campaigns that both the Likud and the Labour Party are waging against Livni. Might it be possible that this is why she is the most strident in demanding immediate and major responses to the trickle of qassam fire and attacks on troops along the border with Gaza that have started to erode the cease-fire?
After all Labour's leader is defense minister "Mr. Security" Ehud Barak, former chief of general staff who was the commander of Likud leader Binyamin 'Strong on Security' Netanyahu in the crack sayeret matkal unit. So Tsipi has her work cut out to prove her military credentials. Her TV campaign spots mention that her father was in the Etzel and that she worked for the Mossad but this is small potatoes compared to the balls of the guys.
In any event it looks as though the violence is going to accompany us right into the Feb 10 elections. The cabinet today decided to dish up a "disproportionate" response to the qassams. The only nunaces are between Tsipi, who wants action now and Barak, who just said that "unlike people who have never held a gun" (nudge nudge, wink wink) he knew that these things needed to be planned and all consequences taken into account etc etc.
In case anyone was wondering, the three main issues of this election campaign are, inevitably, and yet again, security, security and security. All other issues , even the downspiral of the economy, having been relegated to 4th place at best.
To take our minds off the deeeply depressing thought that Bibi Netanyahu will soon be our prime minister, we attempted to commune with nature on our Shabbat morning walk.
Here's Gan Meir (Meir Park) abutting onto King George Street, near Dizengoff Centre. 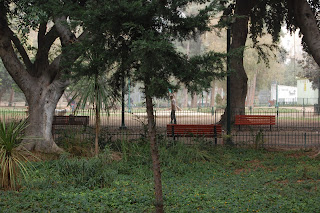 And here's a garden shared by several old blocks of flats on Mazeh Street. We met someone who lives here and invited us in to take a look. Another oasis, very near to one of the busiest streets in Tel Aviv. 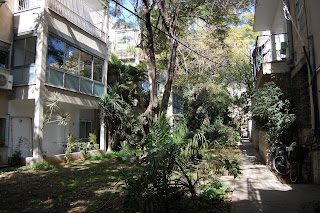 On the same subject, here's a picture of the new park in the old Templer Sarona neighbourhood, surrounded today by skyscrapers. The fence in the foreground is from the 19th century. The kids, unfortunately for them, are from the 21st. 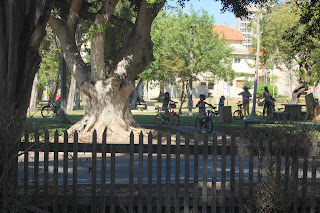