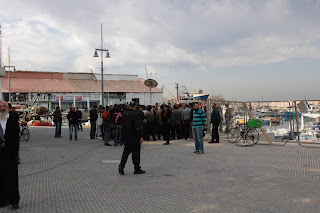 On my Sunday morning bike through Yaffo this morning I heard (on the radio/phone) that the government had decided to block a ship carrying humanitarian supplies for Gaza from sailing from Yaffo port. The ship was sponsored by the Israeli Arab community (the Islamic Movement according to Ha'aretz) and nearly all Arab members of Knesset were supposed to have been on board. Since I was nearby, I decided to take a look. It wasn't hard to pick out the knot of cameramen around the grounded MKs. 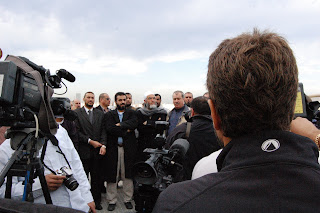 On the sidelines, I heard one worried man saying that the police had confiscated his ship last night. The man in the middle with the grey beard (click pic to enlarge) and the scarf is Sheikh Riyad Saleh, formerly the mayor of Um el Fahem and today the leader of the main wing of Islamic Movement in Israel. To his right, in a sweater, is Knesset member Mohamad Barakeh, who leads the secular/communist mainly Arab Hadash party. Since the ship had been whisked away by the authorities, this was obviously a media opportunity designed to show that there was unity in the ranks of the Arab community when it came to caring about the residents of Gaza. They eventually announced that they would not be deterred and would try to get a truckload of supplies in by land. 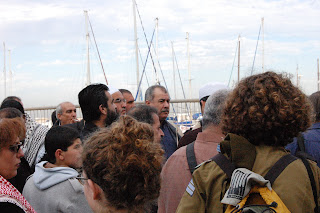 Two young girl solders from Galei Tzhal (The IDF's radio - much less militaristic than it sounds)
added an incongruous touch alongside the keffiyeh wearers. I heard one woman tell them, politely, that since she didn't recognise the IDF, she would not be interviewed by it. The girls didn't seem to be too bothered and other interviewees seemed less hesitant. 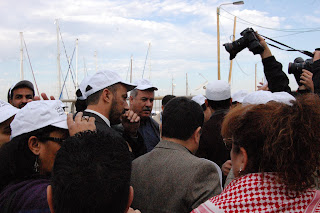 Someone started handing out hats with a slogan, the cameras rushed forward and I moved on.

Over the weekend over 20 missiles have fallen on towns and villages in the western Negev. In effect, the tahadiyeh or lull that we 've been enjoying for the past few months has effectively ended. At the same time, the world has increasingly condemned Israel's seige of Gaza as a case of collective punishment prohibited under international humanitarian law. What to do about Gaza is therefore a burning question that everyone in the political arena - Jewish and Arab parties alike - uses for his own political purposes.

The options range from military operations to accepting the Hamas' offer of a long term hudna (cease-fire). Each option has the potential to turn out horribly badly. As a result the Israeli government seems to be more intent on managing the situation than resolving it.

The militant Palestinian groups in Gaza fire rockets, not only at innocent civilians in Israel but also at the very crossing points that bring them aid, and at the power station that supplies them with electricity. Consequently, Israeli public opinion favours tough responses: if not a military invasion that would bog Israel down in a bloody conflict for months, then at least some punishment that will make them see the error of their ways. In practice the result has been counter-productive. The Hamas government has been effective in persuading Gaza's residents that heroic resilience is the only alternative in the face of the seige and the occasional IDF strikes against rocket launchers. To help matters. the Egyptians allow supplies to flow into Gaza through hundreds of tunnels that allow Gazans to ward off starvation and conduct some sort of basic black economy. Meanwhile, in Ramallah, the Palestinian Authority, busy mopping up pockets of potential Hamas opposition in the West Bank, wants to bring Hamas to its knees no less than Israel but has to tread a fine line between condemnation of the seige, and ensuring that its arch-enemy Hamas is not handed a victory.

Little wonder then that no-one knows what to do.

Email ThisBlogThis!Share to TwitterShare to FacebookShare to Pinterest
Labels: Gaza