taking up the fight 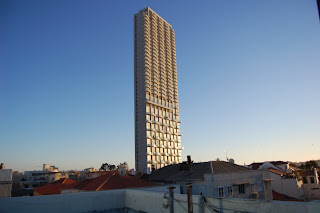 Neve Tzedek (Nehushtan) tower as seen from the rooftop next to the rooftop. Another six are planned along the same road, two adjacent to this one.
The local Neve Tzedek community centre was buzzing with activity the other night with about 100 local residents cramming in to hear speeches and sign up to volunteer and contribute. Even some of the local celebs could be seen among thge locals. There was a catalyst for this sudden spurt of community action in our normally placid and increasinghly gentrified neighbourhood. This came in the form of a policy documentadopted by the Tel Aviv local planning and construction committee recently approved a policy document for building in the mesila (old train tracks) area running along Rehov Eilat/Derekh Yafo.

The document refers to an area of 128 dunams and includes seven towers. The new buildings will add some 650 residential units to the 750 now existing in the area. Included in the buildings referred to in the document is the 38 storey Neve Tzedek (Nechushtan) tower that was built 5 years ago and can clearly be seen from the rooftop. The additional towers slated for construction are the Lieber Tower, a 32 storey tower for residential or office use which will be even closer to the rooftop ; the Niva Tower, 28 floors slated for residential use; The Ha-atad Tower, 32 storeys for office or residential use (next to Lieer and therefore also highly visible) ; the Lapid quarter that will include two towers containing 150 apartments and the Eliphelet area that will hold two additional towers.


In view of the latest development, the ‘Residents for Neve Tzedek’ non-profit association believes that if action is not taken soon the battle will be lost. Neve Tzedek will quickly find itself surrounded by busy roads and high towers and will become a “traffic island” choked by car pollution and darkened for most of the day by the shade of the towers.

Hence the emergency meeting. Now the idea is to continue to fight the plans through the various planning authorities and at worst, to ensure that the area receives the green spaces and schools it needs. At best, the plans should be overturned and the whole vision rethought but it seems that too much money and too many interests are involved to completely halt the juggernaut of a planning process from steamrolling on.
Anyone interested in making a donation to the cause can do so by making out a cheque to
Residents for Neve Tzedek
c/o Advocate Roy Amsel
Rehov Har Sinai 5
Tel Aviv 65816
at June 28, 2009