Italy 2 - eye of the beholder 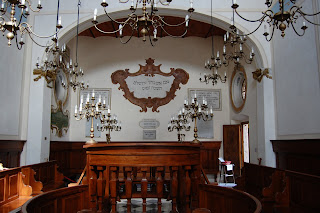 Synagogue, Pitigliano, three Jews left
When visiting a place as rich in history as Italy, the tourist (the photographer) can follow his/her own religious or cultural inclinations and take a personal trail. On Rosh Hashana we shared apple, honey and songs at 'home' in a converted farm cottage in Montefesciano. Christians might look for churches, Moslems for mosques, we tend to look out for synagogues. In the Tuscan hilltop village of Pitigliano we found one, part of a sort of Jewish heritage centre in what was once known as "La Piccola Gerusalemme"

Here it was sobering to recall that 'ghetto' is not only an Italian word but an Italian invention. The Jewish community of 500 that shared the complex of synagogue, bakery, slaughterhouse, mikve etc were confined to these narrow quarters from the middle of the 16th century until 1871 when Italian unification also brought emancipation to the Jews.
There are shops nearby professing to sell Jewish food, consisting mainly of hard, round matzas. One shop carried this mysterious sign having to do with slow food but including the word 'goym' (translations welcome) 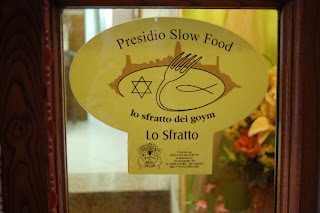 In the old photo below, Jewish women baking bread, or maybe those round matzas. 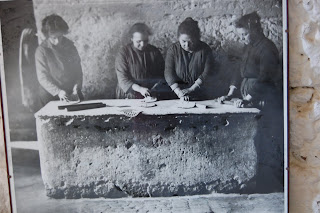 And so the pleasure derived from the scenery, the friendly people, the quaint old houses etc. becomes diluted somewhat by knowledge of history, especially when it impinges on your particular group.
And, suckers for punishment that we are, was it just by coincidence that we happened to book a B&B in the Jewish Ghetto in Rome over Rosh Hashana? Here the security was tight as the small community spilled out of the great synagogue in a hubbub of expansive Roman chatter.
According to Jewish Italy ,about 15,000 Jews live in Rome today. Neither Sephardim or Ashkenazim, they are called 'Romanim', tracing their Roman roots back to the second century B.C.E., well before the larger Jewish Diaspora. This makes them the oldest Jewish community in Europe. They have their own language, a mixture of Hebrew and Italian, and their own culture. Like Jewish communities all over Europe today, they and their institutions are also in need of security 24/7. We hung out with the locals along the Jewish strip of shops, cafes and restaurants understanding little but enjoying the proximity to a warm lively, friendly community.
By coincidence, Saed Kashua, the satirical Arab-Israel writer who writes in Hebrew and publishes a weekly column in Ha'aretz, wrote about the same phenomenon of being lulled into an Italian fantasy before being jolted into reality this week - only from the Muslim perspective (worth a read).