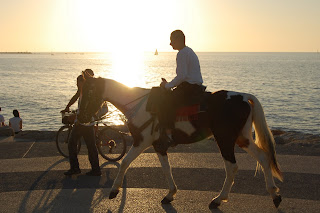 While Europe freezes, Tel Aviv (and the rest of the country) basks in an Indian Summer with temperatures in the low twenties. The air is uncannily warm for January, at least in the middle of the day. The shadows start lengthen early on and by 5.30 it's dark. The springlike weather has brought everyone out. 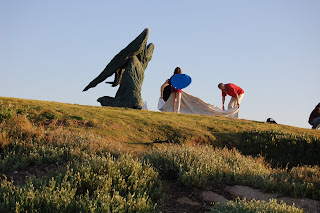 "U.S. envoy George Mitchell will arrive in the region this week without a new agenda for renewing negotiations between Israel and the Palestinians, the pan-Arab newspaper Asharq al-Awsat reported on Saturday." according to Haaretz . Not an inspiring headline for those of us still interested in solving the Israeli-Palestinian conflict.  Probably the last thing on the minds of the picnikers above spreading a blanket in the soft sunlight (above) under Ilan Gur's sculpture of the Propher Elija (I think). In fact, interest in politics, especially the "conflict",  is probably at an all time low in Israel right now. This week one of the few decent politicians left in the Labour Party - Ophir Pines - quit the Knesset, saying that he was fed up with everything and wanted to go home. And as regards the Palestinians Aluf  Benn  wrote in Ha'aretz this week :


"Let's assume the optimistic forecast by special U.S. envoy George Mitchell comes true and in two years the establishment of an independent Palestine is declared at a ceremony. The event will be broadcast on prime time, but most Israelis will opt to view "Big Brother 6," "Survivor 7" or whatever the next television hit is. Viewers will behave this way not because they oppose a Palestinian state but because they are indifferent. Palestine-shmalestine simply does not interest them." 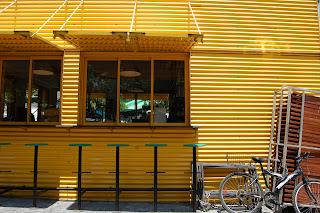 Cafe in the Yafo flea market

Nor apparently does Palestine -shmalestine really interest the Israeli and Palestinian leaderships otherwise why would they both be making preconditions for renewing the negotiations that they know the other side will be unable to accept. And to top it all George Mitchell is plan-less. One briefly wonders, yet again, whether 'Palestine-shmalestine' is ever going to get off the ground and whether Israel will ever be at peace. But then the afternoon sun takes effect and the question fades into insignificance.

The light in Yaffo has a special quality.  It seems to be saying: "empires will rise and fall and this light has seen it all and it means as much as the froth on the waves." 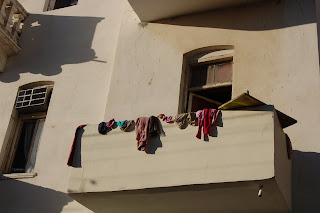