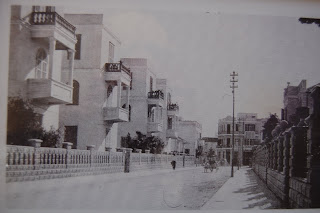 This is a photo of nos 8 and 6  - the twin beauties on the left. It was taken in 1927. There is reportedly an earlier photo of them taken in 1924, the year they were built, that shows them standing in splendid isolation, surrounded by sand. But by the time this photo was taken, pavements had been laid on Rehov Yehuda Halevi (they seem to be in better shape than the ones we have today), and the road, through still unpaved, seems smoother than the existing version; certainly smooth enough for the horse and cart clip-clopping towards Neve Tzedek. There's a spanking new electricity pole outside the Hadassah hospital (hidden on the right behind the imposing stone wall and a general air of gentility about the quiet street with its substantial buildings designed in what was later to be called the Eclectic style :  a wonderful hodge-podge of European romanticism and eastern fantasies a la One Thousand and One Nights.

The "twins" were built by immigrants from Russia who had apparently smuggled out enough rubles to invest in the new Jewish enterprise taking shape next to Yafo. Number 6 started life as a residential building divided into modest apartments and was later leased to the state and served as a court. There were other courts along the street and when we moved into the neighbourhood in 1994 there was still an old man sitting behind a typewriter on the pavement who typed up depositions or whatever for the court clients. 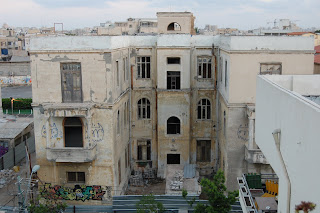 Fast forward 81 years to 2008 and look at this photo taken from the Rooftop.  Number 6 is forlorn. The court, transferred to more modern  premises is long gone and no 6 has become a refuge for the homeless, junkies (I'd find used syringes in the front garden) and young rock bands making their first clip. But, hope, or rather,  gentrification, was at hand. Restoration was chic and happening everywhere, the cheap textile shops had been replaced by sushi bars and boutiques and property prices had skyrocketed. Number 6 had been purchased by a foreign investor and boarded up to prevent entry to undesirables. 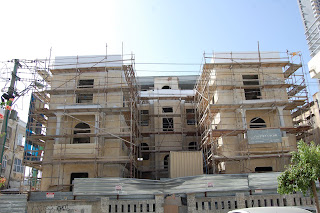 And a few months later, work began. We would awake to the roar of pneumatic drills, be driven demented by the harsh drone of a cement mixer, wait for long minutes next to our own parking space when the road was blocked by heavy equipment. I could go on. Yet, through thick and thin, we barely uttered a complaint, thankful that someone else was sinking millions into restoring at least one of the twins to its former glory. 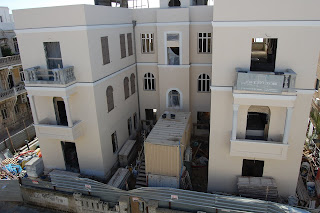 By September 2009 Number 6 was well on its way to a new life as a refuge for a small number of millionaires who had already purchased a few huge apartments for millions. On the roof, a new structure designed for poolside (!) lounging and sunset-watching was taking shape. 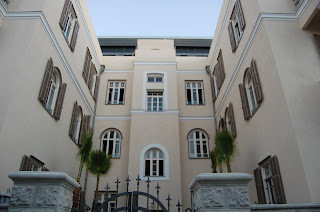 This﻿ photo was taken yesterday. No 6 is nearly finished. Palms and bushes have already been planted in the front garden The angle of the shot hides the building materials in the front drive but you get the picture. Number 6 has come full circle, from genteel residence to genteel residence. But while its original occupants were new immigrants from Russia taking their first steps in "little Tel Aviv", its new occupants are more likely to be successful high-tech entreptreneurs or tycoons from abroad looking for a "different" holiday home. The junkies and the homeless have moved further south. Recently, the second twin - number 8  - was purchased by an investor. We're preparing mentally for more years of noise and dust.