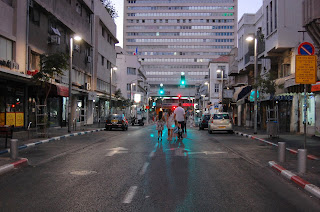 Erev Yom Kippur, Rehov Herzl.  A family walks down the centre of the normally busy street towards the Shalom Tower safe in the knowledge that they will not be mown down by a car. 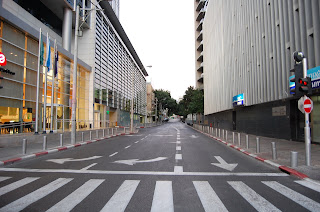 Yehuda Halevi, a.k.a. 'rehov habankim' because the big three banks have their headquarters here. Bereft of human or vehicular activity - as though on the day after a mystety virus had wiped out the population - the functional office towers suddenly seem functionless and the arrows on the street are pointing to nowhere. 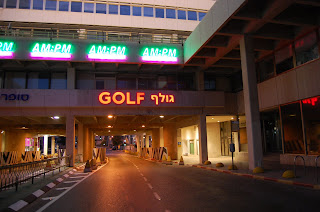 In this tempotrary deserted world the neon lights shine for no-one. All commerce halts. Capitalism takes a day off.  Apart from the clicking of the superfluous traffic lights, silence reigns. 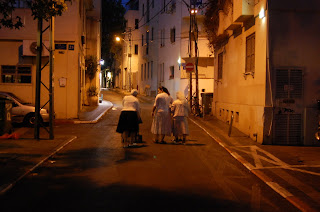 Rehov Shabazi, Neve Tzedek. Three women, one pushing a pram, walk home from the kol nidrei service that brings in Yom Kippur. They might be a grandmother (right) grandaughter (middle) and daughter (left pushing  agrandaughter. Four generations sharing the same fast. The cafes and boutiques are closed, the yuppies have parked their jeeps elsewhere and the streets are given over to the pre-gentrification locals, many of whom are traditional or religious. 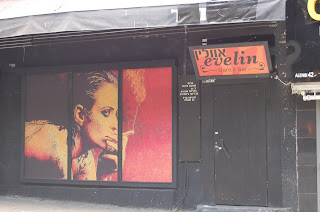 The next morning we take to our bikes and my camera spots details normally obscured by the traffic, pollution and noise, like this dance bar on the seedy end of Allenby. 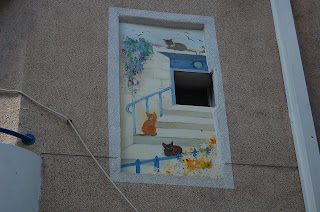 An ingenious painting that conceals and enhances a bricked in window frame on the corner of Allenby and Idelson. 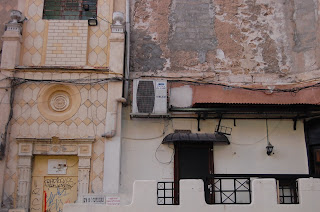 The chaotic contrasts in the facade of a building on Lilienblum. All too soon, the day is over, the prayers and the penitence are forgotten, the cars return to the streets and its back to work and keep your eyes on the road.
at September 23, 2010

Thanks for the tour on the quiet streets...so peaceful...if only...
Shana Tova! Love the photos and especially that painted window of cats.

I really enjoy your beautiful pictures and articles!

We provide detailed and encompassing reviews of the best places to eat, suggest the best
dishes to order, and point out our readers to the most unique dining experiences in Tel Aviv. Please check out the site at http://www.tastetlv.com. We would love it if you could include us on the links page and in return we will link you to our blog.
Please be in touch!