Evidence of normality on the Rooftop 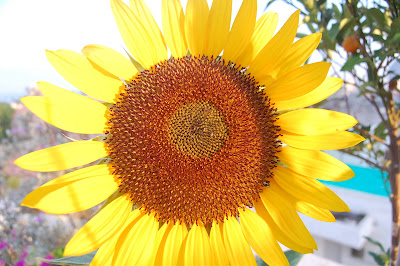 The endless hot-muggy weather has kept me more indoors than out. It's only in the early morning or evenings that I escape the AC for some fresh air. Venturing out at sunrise a few days ago I discovered that a fully grown sunflower had appeared on the Rooftop. 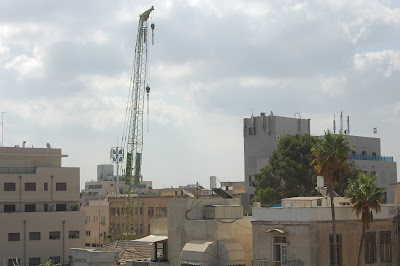 Over the road, signs of work on the Tel Aviv metro. 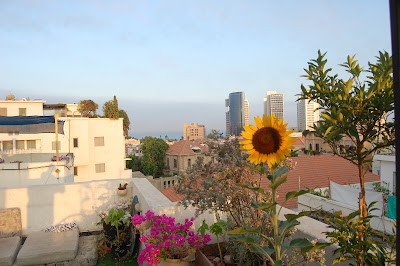 A humid haze hangs over the sea to the west. 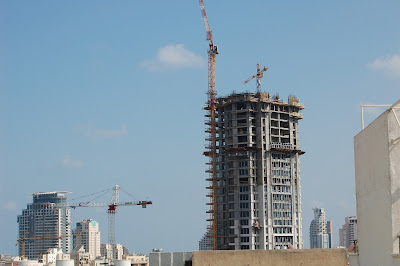 To the north on nearby Yitzhak Elkhanan, a big  residential tower is going up. 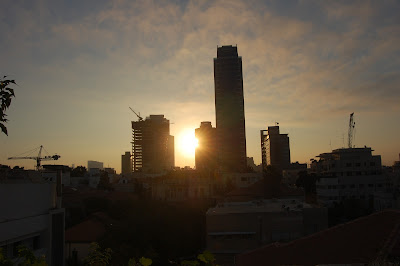 The sun rising through the office buildings to the east. 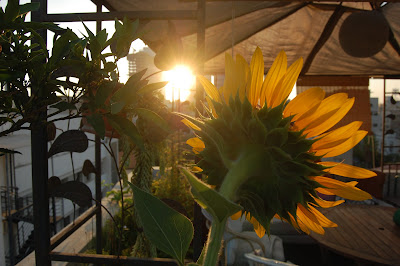 To be welcomed by the sunflower...

At this time, with the threat (no one for sure knows how real) of an imminent war with Iran and its satellites feeling more credible by the day, and just before we head off for NYC for a family visit, I wanted to post these signs of normality. In a superstitious attempt to ward off the coming disaster? As a way of documenting the Rooftop and its immediate surroundings before the ....

"A foul wind is blowing over Jerusalem and Tel Aviv, with weekend gusts toward Caesarea. A wind of pugnacity. Before the eyes of Prime Minister Benjamin Netanyahu, and in the spirit of the chants of which he is so fond ("They are frightened"; "There's no free lunch" ) - it's as if a new sign has been raised high, bearing the words: "Strike now!" " (Haaretz)

"Prime Minister Benjamin Netanyahu and Defense Minister Ehud Barak  advocate an attack of Iran's  nuclear facilities in the upcoming fall, Yedioth Ahronoth's senior commentators Nahum Barnea and Shimon Shiffer reported Friday. According to Barnea and Shiffer, "Not a single state official or military official or even the president – supports an Israeli attack in Iran." (Ynet)

Paris has reportedly drawn up emergency plans to evacuate French citizens from Israel in case of war.

The plan, reported by French news outlet La Tribune, would see 200,000 French nationals ferried in small boats to large warships stationed in the Mediterranean.Diplomatic sources told the news outlet the plan was drawn up amid fears that Israel may come under attack from Iran or Hezbollah in the wake of an Israeli attack on Iranian nuclear sites. (Times of Israel)

Wishing us all a safe fall....

Email ThisBlogThis!Share to TwitterShare to FacebookShare to Pinterest
Labels: Rooftop