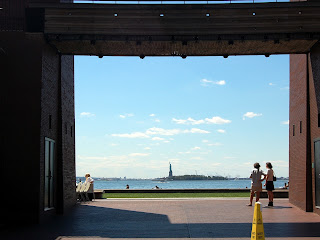 We've recently returned from two weeks in the USA visiting family and had the good luck  to exchange the Rooftop for a fortnight with Paula Derrow and her husband whom we met through a house exchange site. So while Paula and R were discovering the charms of Neve Tzedek, A & I were wandering around the  Upper West Side. And while they  were enjoying the beach here at the eastern end of the Mediterranean, we were riding bikes down the Hudson River Greenway, all the way to Battery Park. 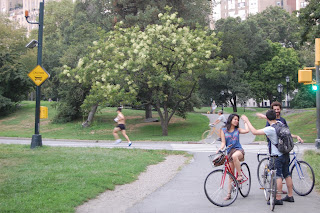 Apart from the financial savings, people who exchange homes do so in order to simulate  the experience of living as an "ordinary" person in a foreign place. Living in an apartment block and not in a hotel, means that you get to meet the neighbours in the stairwell or the lift; you visit the local grocery store, buy in local shops and eat in local restaurants.

Everywhere we went in New York, people were kind, courteous and patient. What happened  to the brusque and gritty New York of old we wondered? Where did all the fast-talking hard-bitten New Yorkers  with no time for tourists go? But time and again people went out of their way to direct us or help us in some way. We also noticed that neighbours greeted each other more generously than in Tel Aviv. That people acknowledged each other and seemed more open to some sort of social contact than in Israel. 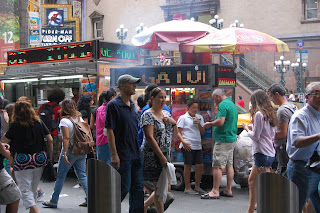 When we got home and started exchanging notes with Paula, she shared her blog 'The 49th Year'  where she'd written some posts about her stay. After praising the virtues of New Yorkers, it was somewhat startling to read her impressions of Israelis (mainy Tel Avivians). Fo For example people she was introduced to , took the time to show her around Tel Aviv and Jerusalem, something that a New Yorker would never do. And there was more...

"One thing that's so nice about being a tourist in this town is that all these people take you right into their world--they are not jaded about tourists the way New Yorkers are but are genuinely interested about where we're from, why we're here, what we've done. (Imagine listening to a Times Square tourist with such interest and enthusiasm.)"

How is that Paula was able to strike up numerous conversations in which complete strangers  expressed genuine interest in her  when in my experience that  is a fairly rare occurrence in Tel Aviv. 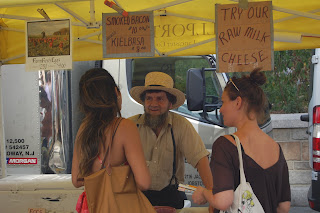 "And about the Israeli character, so often described as pushy, money grubbing, arrogant:" wrote Paula  "Yes, we've seen some arrogance, but mostly we've seen warmth, eagerness to help and happiness that we've come to their country, despite trouble brewing with Iran. Kind of like misapprehensions about New Yorkers."

This cynical Tel Avivian might suggest that, "happiness that we've come to their country, despite trouble brewing with Iran," could be also construed as amazement  that anyone would be so foolhardy as to visit a city that could soon find itself under a barrage of missiles.  In the two weeks that I was in new York, Iran was hardly mentioned in the news while in Israel the threat of war had been headlining for weeks, driving us all  to the verge of hysteria. So Paula, (I'm admittedly speculating now) was probably vaguely aware of tension with Iran while the  people she spoke to were all too keenly aware of it, not to say truly afraid and naturally assumed that she would would be too. We might live in global village but, unless you really look for it, the news is still doled out in local flavours, sometimes leaving the tourist in a state of blissful ignorance. 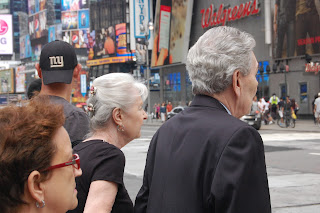 
Meshane makom meshane mazal (Change your place and you'll change your luck) goes the Hebrew saying. In New York, exuding the relaxed, vibrations of  befuddled tourists, we may have prompted some of the kind and polite reactions we got there. Paula and her husband, both undoubtedly charming people, may have elicited a similar response here. A response   reserved, to an extent, for outsiders? 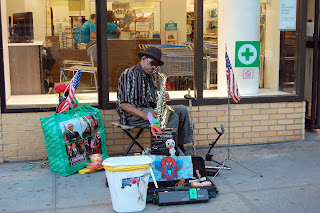