Gay community hits the square and a new resolution 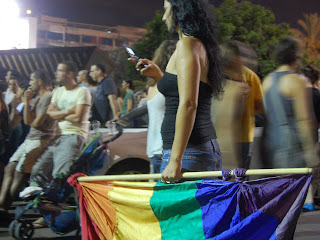 After a long break - for which the lethargy induced by a Tel Aviv summer is only partly responsible - I'm back. It took a dramatic event and a fractionally less humid day to force me to return to blogging. But I also return with a resolution - only to blog when I have at least one of my own photos to display. The rest - whether it's the Israeli Palestinian conflict, religious vis. secular, planning disputes in Tel Aviv, Iranian missiles or what to do with refugees- you can explore yourself. If I'm to develop more skills, I need to concentrate on photography and let the words flow from the images, So, from now on, no pix - no blog.
The dramatic event was last week's murderous attack by a black-clad assassin a week ago at a club for gay youth on Nahmani Street called bar noar (youth bar). When the assailant had finished pumping bullets into his terrified victims, two were dead and 15 injured, some critically. 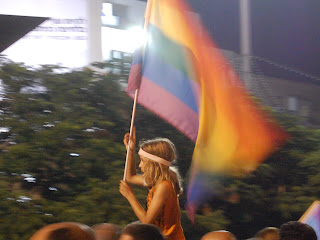 At first, the immediate suspect was someone from the orthodox community, some of whose representatives, including Knesset members, especially from Shas, are openly and vocally homophobic. Last night, exactly a week after the shooting we went along to a rally in Rabin square(the site of course of another murder bred of hatred and intolerance), to commemorate the victims and to show some solidarity with our gay friends. 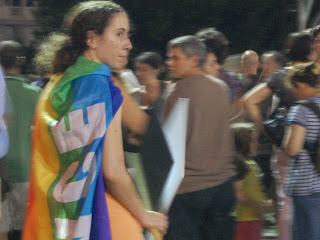 Israel's President Still Can't Say the Word Gay wrote Gidon Levy in Ha'aretz this morning, and indeed, while the square was awash with banners, it was not overflowing. Those who were there were the local gay community and secular liberals like us (in other words the Tel Aviv Bubble). Most of the population would have rather been seen dead than in the square. Even some well known gay artists, like Yehuda Poliker, preferred not to appear. 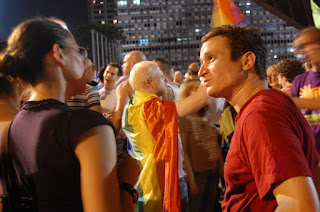 But , despite the disappointing turnout, thousands of gays were openly demonstrating their anger and their determination that this be a seminal moment in their struggle for full acceptance. President Peres, though struggling within the limitations of his archaic vocabulary, was present and the education minister did publicly promise to inculcate tolerance in schools. The killer, meanwhile, is still at large. 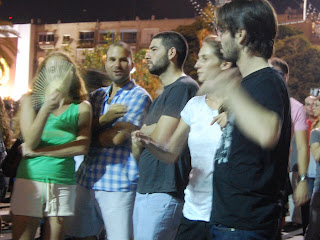