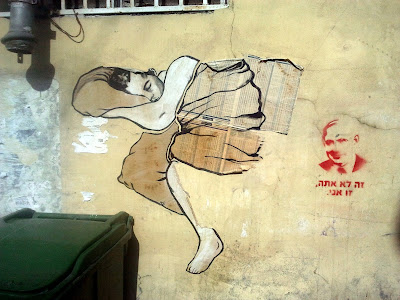 Graffiti, Yehuda Halevy corner Allenby. Click and you'll see that the part of his blanket is painted over newspaper

Some images snapped, mainly by phone, in the past few weeks. 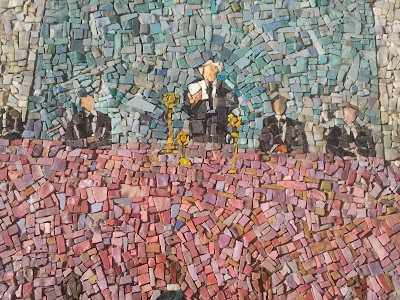 David Ben Gurion reading the Declaration of Independence, a detail from a mosaic created by Nahum Gutman  the quintessential Tel Aviv artist. It comes from the mosaic sculpture below that has recently been placed between office buildings at the very beginning of Rothschild Boulevard.  A few yards away, work is progressing (slowly) on a massive underground parking lot. When it's finished it will be covered and turned into a piazza. 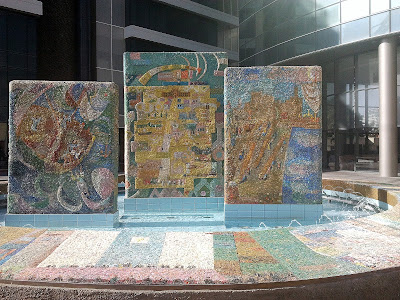 Here's the entire piece, which as a sculpture is, well, ugly. Which is why Tel Avivians never really took to it. For years it was situated on Bialik Street (for my money, the prettiest street in Tel Aviv). If you click on the link above you'll see a photo of it on Bialik. A few years ago Bialik was renovated and the municipality exploited the occasion to replace Gutman's mosaic with a round pond with water lilies that is much more popular. The sculpture was placed in storage to be reassembled years later (without  fanfare) in its new location. 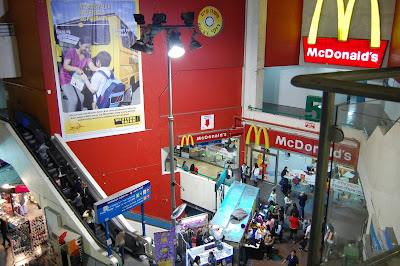 A corner of the Central Bus Station.

A false hunt for an exhibition on a Saturday evening took us to Tel Aviv's  Central Bus Station . This gargantuan monstrosity, which took over twenty years to build, and contains  a thousand shops and restaurants, was for a few years the biggest bus station in the world (!).  Nowadays is now surrounded by neighbourhoods that are now populated  almost entirely by migrant workers . A few steps away from Jewish-Arab Tel Aviv -Yaffo  you  enter a third world more reminiscent of  Cairo or Delhi. The big poster on the top left advertising Western Union carries a message in  which the first two words are Walang Palya. 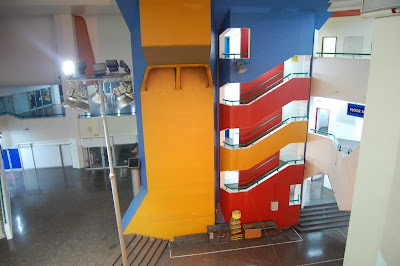 An attempt to cheer the place up 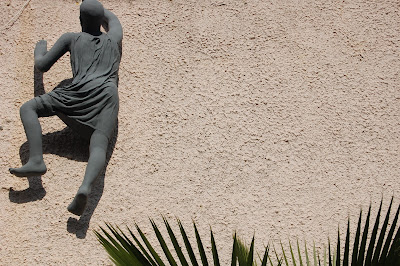 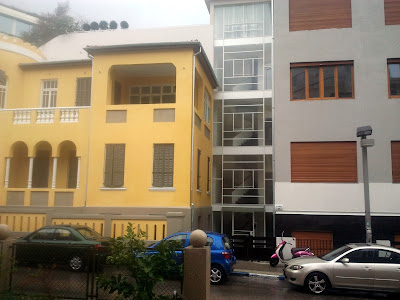 At 10 Mazeh Steet an old eclectic style building from the 1920s (complete with tower and turrets. colonnades and romantic balconies) which stood forlorn and deserted for years, has been rescued  and integrated  into a new residential building.

One thing I didn't come across in the past few weeks is thousands of election campaign posters defacing walls and peeling off noticeboards in the rain. The elections weren't very inspiring but at least most of the campaigning is now done on the Net.
at February 02, 2013

What a lovely blog you have, love all the images, you don't see these everywhere, but they are very typically Tel Aviv indeed :)